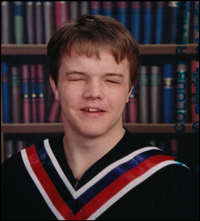 With profound sorrow, we announce the passing of Michael “Mike” Charles Jensen of Medicine Hat on Monday, October 2, 2017, at the age of 35. Mike was born in Medicine Hat on January 17, 1982. He is the fourth of eight children born to Roger and Joanne Jensen of Medicine Hat. He will be fondly and lovingly remembered by his two children, Mary and Nolan, his wife, Fiona Underwood and his parents. He was predeceased by his first wife, Zaidee Potter who passed away in 2012. He will be greatly missed by his parents and surviving siblings, Jennifer (Michael) Roberts, Jeff (Eva) Jensen, Andy (Gloria) Jensen, Amy (Blair) Smethurst, Tessa (Tony) Huber, and Zach Jensen. Many nieces, nephews, cousins, uncles, aunts and friends will miss his ready smile and cheerful and playful disposition. He is also survived by his good friend and mentor, Margaret Davies. He was predeceased by his sister, Melissa Joy Jensen Gwynn, a niece, Taylor Roberts, and his grandparents. Michael was the first blind student that the Medicine Hat School District taught beginning with kindergarten through to grade 12. He graduated from Crescent Heights High School with the silver medal for academics. After high school, Mike earned his certificate as a massage therapist in Calgary. He then went on to earn a bachelor’s degree in cell biology from the University of Alberta. He worked as a data analyst for Alberta Health Services until his health prevented him from continuing. Mike was always very independent despite having lost his vision completely at a young age. He always met each challenge with determination and a smile. When he was told that he couldn’t do something because of his blindness, that made him all the more determined to do that thing. He showed by patience, determination and courage that almost any obstacle could be overcome. He was always learning new things and was always ready to try something new, especially if there was some degree of excitement, speed and danger. He loved playing musical instruments like guitar, bass, drums, trumpet, piano, and recently was learning the banjo. He loved the outdoors and any sport. Over the years, he made many good friends through ASRAB (a blind sport organization) and the CNIB. He was loved and admired by all who knew him. Mike inspired hope in others and showed by example to never give up despite the challenges of life. The Funeral Service will be held at the Church of Jesus Christ of Latter-day Saints, 1864 Division Avenue N.E., Medicine Hat on Friday, October 6, 2017, at 1:00 p.m. with Bishop Michael McClung conducting. Interment will follow at the Redcliff Cemetery. Those wishing to pay their respects may do so at the church between 11:00 a.m. and 12:45 p.m. (Condolences may be expressed by visiting our website: www.cook southland.com) In lieu of flowers, donations can be made to the education fund for Michael’s children at any branch of Service Credit Union, in the account for the “Michael Jensen Family”; to Alberta Sports & Recreation Association for the Blind, 15 Colonel Baker Place N.E., Calgary, AB., T2E 4Z3 or to the CNIB, 1929 Bayview Avenue, Toronto, ON., M4G 3E8. Honoured to serve the family is