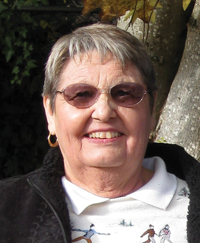 Lenora was born August 18, 1940, raised on the family farm, and received her education in the Conquerville area. Lenora married Timothy Schlachter on November 4, 1959. Together they farmed and raised their four children in the Conquerville district. In 1983 they retired to Medicine Hat where she enjoyed hobbies that included cooking, gardening, sewing, and painting. Together they enjoyed square dancing, travelling, and yearly trips to Vancouver. Lenora loved having her family around and there’s nothing she enjoyed more than dinners shared with them. What brought her the most joy though, were her grandchildren, whom she adored with all her heart.

It’s love that makes a house a home and love that keeps a family close.

Thank-you to a wonderful Wife, Mother and Grandmother for the wonderful example you’ve been to us all.

A Private Family Service will be held. Memorial gifts in Lenora’s memory may be made to the Lupus Society of Alberta, Suite 202, 1055 – 20 Avenue NW, Calgary, AB T2M 1E7. Condolences may be sent through www.saamis.com or to condolences@saamis.com subject heading Lenora Schlachter. Funeral arrangements are entrusted to