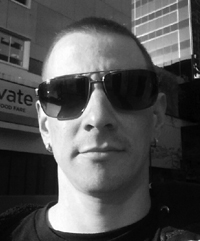 It is with great sadness that we announce the sudden passing of Brody Alexander Jones of Medicine Hat, AB. Our youngest son died suddenly on September 28, 2017 in Edmonton, AB after he succumbed to a long battle with addiction.

Brody was born June 29, 1989 in Medicine Hat, AB to the parents of Loretta Brost (Ratti) and Brian Jones. He is the youngest of two siblings.

Brody was a bright and loving child who spent his school years in the Redcliff School district and later McCoy High School. Brody was very proud of his accomplishment in the Army Cadets. In his short life Brody worked various jobs but his favorite was doing concrete work. He had a great work ethic and would do anything to help you out. The apple of his eye was his daughter, Jade Amara Jones.

Funeral Service will be held in Saskatoon at a date to be announced. Condolences may be sent to beyondglass@gmail.com or www.parkmemorial.com.