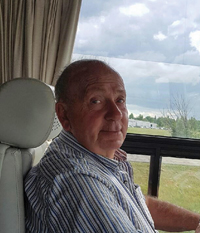 John David McBain of Medicine Hat, passed away on Monday, October 9th, 2017 at the age of 69 years. John leaves to cherish his memory his wife, Rose; sons, John (Stacey) McBain, Trent (Marcy) McBain and Kris Simons; his brother, Don (Marilyn) McBain; as well as numerous dear grandchildren, nieces and nephews. John was predeceased by his mother, Lenore; his father, Harold; and brother, Byd. John was born and raised in Medicine Hat. He was very proud of the years he spent in the Navy before returning home to Medicine Hat. John worked at the Bank of Montreal, and spent many years with CP Rail. He retired from the railroad to purchase the Royal Hotel from dear friend, Keith Lynn. John enjoyed the time he could spend at the Royal with friends and working alongside his son over the last 16 years. John also enjoyed riding his Harley and in recent years, his Slingshot. A private family interment will be held at Hillside Cemetery. Memorial gifts in John’s memory may be made to the Palliative Care Unit, c/o Medicine Hat and District Health Foundation, 666 – 5th Street SW, Medicine Hat, Alberta, T1A 4H6. Condolences may be sent through www.saamis.com or to condolences@saamis.com subject heading John McBain. Funeral arrangements are entrusted to