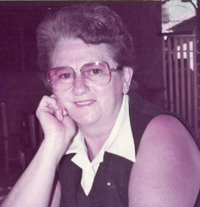 Florence Koch of Medicine Hat, beloved wife of the late Alex Koch, passed away on Wednesday, October 11th, 2017 at the age of 87 years. Florence leaves to cherish her memory one son, Curtis (Heather) Koch of Blind Bay, BC; two daughters, Brenda (Bob) Snaith of the Dominican Republic and Candace Koch of Medicine Hat; six grandchildren, Blaine (Bobbie) Munsch, Tracie (Shawn) Martin, Crista (Nathan) Herter, Jamie Carnes (James Duffy), Eathan Carnes and Cody Carnes; eight great grandchildren; as well as numerous nieces and nephews. Florence was predeceased by her husband, Alex; two daughters, Shannon Bingham and Alexis Holtz; two grandchildren, Corrinna Munsch and Dawn Bingham; her parents, Rudolf and Rose Steinkey; three brothers, John Tumbach, Francis Tumbach and Richard Steinkey; three sisters, Elsie Martyrchuk, Jane Gustufson and Mary Sehn; as well as dear friend, Cecil Ziebart. Florence was born on May 12th, 1930 in Fox Valley where she was raised, educated and married Alex Koch on October 22nd, 1947. Together they made Medicine Hat their home. For many years Florence was employed at the Redcliff Glass Factory and then the Medicine Hat Auxiliary Hospital. In her younger years she loved to work, knit and cook. In her later years, she enjoyed playing cards and enjoying the pool at the condo prior to having to go into extended care. Florence loved her family and grandchildren dearly. As per Florence’s wishes, no formal funeral service will be held. A private interment will take place at a later date. Memorial gifts in Florence’s memory may be made to the Alzheimer Society, 201, 770 – 6th Street SW, Medicine Hat, AB T1A 4J6. Condolences may be sent through www.saamis.com or to condolences@saamis.com subject heading Florence Koch. Funeral arrangements are entrusted to