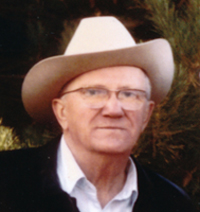 Floyd Lawn Brusky, beloved husband of Amy, passed away at the Southwest Integrated Health Care Facility in Maple Creek on Monday, October 23, 2017, at the age of 94 years. Along with Amy, Floyd is survived by his daughter, Audrey (Tarry) Herter; son, Bruce; grandson, Kelly (Anita) Herter; great-granddaughters, Talyssa and Kierra Herter and sister-in-law, Elva Bertsch. He is also survived by nieces, Beverly (Roger) Butterwick, Carol (Lou) Gagnon, Stan (Erika) Bertsch, Louise (Ivan) Schlaht, Murray (Cindy) Bertsch, Earl (Kathy) Western and Doug Western. Floyd was predeceased by his grandson, Ryan Herter; parents, Peter and Martha; sister, Lida Jean; brothers, Adolf (Mary) and Lawrence (Elsie); nephew, Laverne (Edna) Brusky; brothers-in-law, Elmer Bertsch and Donald (Joyce) Western and their daughter, Karen Western; uncle Frank (Katie) Brusky and five cousins. Floyd was born on April 18, 1923 to Peter and Martha Brusky and was the last remaining member of the immediate families of the two brothers, Peter and Frank Brusky who homesteaded here in 1910. A Celebration of Floyd’s Life will be held at the Maple Creek Legion, 218 Maple Street on Monday, October 30, 2017, at 1:00 p.m. In lieu of flowers, memorial donations in Floyd’s name may be made directly to the Heart and Stroke Foundation of Alberta, 124, 430 – 6 Avenue S.E., Medicine Hat, Alberta, T1A 3K9 or to the charity of one’s choice. (Condolences may be expressed by visiting our website at www.cooksouthland.com) Honoured to serve the family is