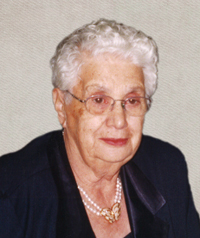 Edna Schaufele of Calgary, beloved wife of the late Emanuel (E. K.) Schaufele, passed away on Monday, October 23rd, 2017 at the age of 93 years. Edna leaves to cherish her memory her two daughters, Rita (Roger) Buxton and Karen (David) Garland; six grandchildren, Blaise (Kelly) Buxton, Curtis Buxton (Angela Grace), Kathleen (Neil) Jesske, Sheila (Joseph) Daraio, Scott (Charisse) Garland and Kellie Garland (Kelly Dickie); five great grandchildren, Evan Jesske, Logan Buxton, Callum Buxton, Lily Garland and Alexandra Daraio; two sisters-in-law, Isabel Stripling and Naomi McCracken; as well as numerous nieces and nephews. Edna was predeceased by her husband, Emanuel Schaufele; two grandchildren, Derek Head and Natasha Garland; her parents, Frederick and Lydia Lindemann; her sister; her brothers; and several sisters-in-law and brothers-in-law. Edna was born on November 21st, 1923 on the family farm in Schuler; the fourth child born to Frederick and Lydia Lindemann. She received her education at Melba School. After her marriage to Emanuel on June 8th, 1944 they moved to Victoria, BC while Emanuel was in the military. After leaving the military, they returned to the Schuler area and farmed until 1974 when they retired to Medicine Hat. Edna enjoyed sewing, quilting, handicrafts and gardening. She was a member of the Lutheran Ladies Aid in Schuler and Moose Lodge in Medicine Hat. Edna loved spending time with her family and will be missed dearly by them. The Graveside Service will be held at HILLSIDE CEMETERY, Gershaw Drive SW & 10th Avenue SW, on Saturday, October 28th, 2017 at 2:00 p.m. with Pastor Emil Krause officiating. Those wishing to attend, please meet inside the cemetery gates at 1:45 p.m. Memorial gifts in Edna’s memory may be made to the CNIB, 102, 520 – 2nd Street SE, Medicine Hat, Alberta, T1A 0C6. Condolences may be sent through www.saamis.com or to condolences@saamis.com subject heading Edna Schaufele. Funeral arrangements are entrusted to