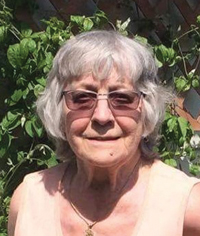 Loretta Wall was born in 1937 in Richmound, Saskatchewan to Millie and John Heck. Being hard working local store owners, the Heck family moved to Medicine Hat where they opened a grocery store in the Riverside area. That would be where Loretta met Bob (Robert A. Wall) who worked in Suffield. The two married and moved to Ottawa and then embraced the adventures of an airforce lifestyle traveling as far as France and living in communities across Canada. It was not long before they had three children – Rob, Bill, and Kim. Retiring from the forces in 1977 Bob and Loretta returned to Medicine Hat where they continued to raise their children enjoying camping, gardening, and eventually grandchildren. Sadly, Bob passed away in 1993. Loretta took great pride in the family they raised and shared that joy often. An avid sports fan she cheered on the Jays and the Riders, and made great friendships through her curling leagues and Tigers games. Her enthusiasm and kinship was appreciated by many. Loretta left us peacefully following a brief battle with dementia and cancer at the age of 80 years. We are forever grateful for the care and kindness she received during her stay at the Carmel Hospice.

Loretta is survived by Rob and Mayda Wall, Bill and Carrie Wall, Kim Wall and Jackie Dzuba; grandchildren, Adam, Robert, Kevin, Morganne (Wyatt), Melissa (Marc), Heather (Shane); and great grand children, Danika, Konnor, and Keenan. Those wishing to pay their respects may do so at SAAMIS MEMORIAL FUNERAL CHAPEL, 1 Dunmore Road SE, on Thursday, December 21st, 2017 from 7:00 until to 9:00 p.m., and on Friday,December 22nd, 2017 from 9:00 until 9:55 a.m. A Celebration of Loretta’s Life will take place at SAAMIS MEMORIAL FUNERAL CHAPEL, on Friday, December 22nd, 2017 at 10:00 a.m. with Gary W. Goran officiating and a luncheon to follow at the Royal Canadian Legion. In lieu of flowers please make a donation to the Carmel Hospice, St. Joseph’s Home, 156 – 3rd Street NE, Medicine Hat, Alberta, T1A 5M1. Condolences may be sent through www.saamis.com or to condolences@saamis.com subject heading Loretta Wall. Funeral arrangements are entrusted to