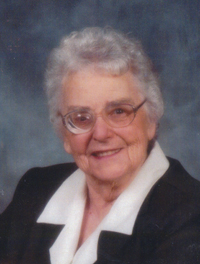 Mom was born in Vancouver, B.C., the third child of Albert and Dorothy Webb. The family moved back to Medicine Hat shortly after Mom was born. Medicine Hat was her home for 94 years. She married Cyril Stanley (Dude) Barton on March 29, 1941 and they celebrated their 41st Wedding Anniversary before Dad passed away in 1982. Together they raised three children. Margery leaves to cherish her memory: children, Olwen Chudleigh, Trudy (Wilfred Wayne) Schafer and Alan (Brenda) Barton; grandchildren, Sandra (Lawrence)â€ˆFremstad, Tom (Tammy) Chudleigh, Bart (Carmen) Chudleigh, Curtis (Henrietta) Schafer, Tracey Schafer, Travis (Candace) Barton and Abbe Barton; great-grandchildren, Lauren and Kirsten Fremstad, Jackson and Claire Chudleigh, Justus and Samuel Schafer and Shelby (Kentrel) Joyner. Mom was predeceased by her husband, Dude; son-in-law, Earl Chudleigh; sister, Pat (Bob) Pearson; brother, Bill (Alice) Webb. Margery resided at the River Ridge Seniors Village for the past four and a half years. We would like to take this opportunity to thank the staff for the care that Mom received, especially these past two weeks. The Funeral Service will be held at St. Paul Lutheran Church, 515 Sprague Way S.E., Medicine Hat on Saturday, December 9, 2017, at 11:00 a.m. with Reverend Ken Edel officiating. Mom’s father, Albert Webb, fought in WWI and the Webb/Barton family have a great respect and love for what the Salvation Army did for men who fought in the trenches during WWI. In loving memory of Margery, donations may be made to the Salvation Army at 164 Stratton Way S.E., Medicine Hat, Alberta, T1B 3R3, or through their Christmas Kettles at various locations throughout Medicine Hat. (Condolences may be expressed by visiting www.cooksouthland.com) Honoured to serve the family is