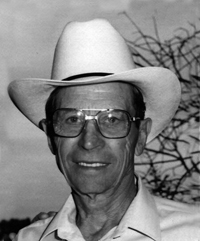 Emanuel “Manny” Houff, beloved husband of Minnie Houff of Medicine Hat, passed away on Tuesday, December 19th, 2017 at the age of 95 years. Manny also leaves to cherish his memory two sons, Brian (Barbara) Houff and Rocky (Denise) Houff, both of Medicine Hat; six grandchildren, Troy (Teresa) Houff, Travis (Shannon) Houff, Tanya (Tim) Ellis, Kimberly (Sam) Roy, Amanda Houff and Darren (Nikki) Houff; nine great grandchildren; one sister, Emily Howkins; two sisters-in-law, Violet Houff and Leona Leismeister; as well as numerous nieces and nephews. Manny was predeceased by his daughter, Valerie Scholten; his parents, Jacob and Bertha Houff; one great-grandchild, Jett Ellis; two brothers, Albert Houff and John Houff; and one sister, Alice Bitango. Manny was born in 1922 in the small Hamlet of Woolchester, Alberta to parents, Jacob and Bertha. Times were hard. At the age of 15, Manny began farm work for various area farmers and at 20 joined the army. The opportunity to work with horses during his service was a perfect fit. He recalled these days as some of the best of his life. Upon returning home from the military he gained employment on the Griffin Ranch in Govenlock, Alberta and later at the Ross Ranch, south of Manyberries. A partnership in 1946 with his younger brother, Johnny in dairy farming would prove to be his life career. In 1949, Manny married the love of his life, Minnie Sieppert and together they worked hard and made a home for their 3 children, Brian, Rocky and Valerie. The next 40 years Minnie and Manny were dedicated to their family and the dairy operation. It was a life Manny loved and one he took great pride in. They retired in 1986 to Medicine Hat and Manny kept busy playing and coaching baseball, bowling and playing pool. Family was very important to him and he especially loved spending time with his grandkids. Manny was a fair and kind man. A man of integrity and compassion and HE LOVED TO DANCE. Those wishing to pay their respects may do so at SAAMIS MEMORIAL FUNERAL CHAPEL, 1 Dunmore Road SE, on Friday from 7:00 until 9:00 p.m. The Funeral Service will be held at VICTORY LUTHERAN CHURCH, 2793 Southview Drive SE, on Saturday, December 23rd, 2017 at 1:00 p.m. with Reverend Jim Bredeson and Chaplain Dallas Hjorth co-officiating. A Private Interment will take place at Hillside Cemetery. Memorial gifts in Manny’s memory may be made to his granddaughter’s fight with cancer, Tanya Ellis, c/o P.O. Box 20066 Kensington, Medicine Hat, Alberta, T1A 8M4. Condolences may be sent through www.saamis.com or to condolences@saamis.com subject heading Manny Houff. Funeral arrangements are entrusted to