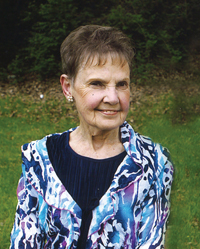 Margaret “Peggy” Plante beloved wife of Lawrence “Larry” Plante of Medicine Hat, passed away on Tuesday, December 19th, 2017 at the age of 83 years. Besides her husband, Larry, Peggy leaves to cherish her memory her children: Tom (Debbie) Plante, and Laurel (Ken) Solheim; her grandchildren: Ashley Plante, Stephanie Plante, Michelle Plante, Aaron (Shae-lee) Solheim, Brett Solheim, Tyler Plante, April (Justin) Way, and Sherri Plante; one great grandson, Sutter Way; one brother, Tom (Bernice) Morrison; as well as numerous nieces and nephews. Peggy was predeceased by one son, Jim Plante; and by her parents, Ralph and Ella Morrison. Mom was born in Medicine Hat, Alberta on January 25th, 1934 and passed away on December 19th, 2017. She attended Alexandra High School where she walked to and from school from her home in Crescent Heights. While working as a teller at the Bank of Nova Scotia, mom met Larry Plante in the fall of 1953. He was immediately smitten, and the rest is history! They were married on June 18th, 1955 and soon after they were graced by their first-born son, James “Jim” Lawrence. Thomas “Tom” Edward followed a few years later and then Laurel brought up the rear several years after that. The years in the Plante household were full of company, sports and socializing. Mom kept very busy. She volunteered for several causes, taught Sunday School, canvassed for Heart and Stroke, and for Canadian Cancer for many years until her legs would no longer keep up to her heart, as well as selling tickets for the Blue Jays, Stampede Board, and most notably the Medicine Hat Tigers Hockey Club which spanned 27 years! Mom may not always remember your name every time, but she sure knew what section and seat you sat at in the old arena. Mom loved cooking and baking and there was an endless supply of goodies including cookies, pickles, bread and buns, just to name a few. Her passion however, was her kids and grandkids and her garden. Mom continued to garden up until this past year and could be seen outside in the heat of the day with her old Memorial Cup hat on, happily gardening away. She was a warm and loving mom, grandma and wife, and she made a difference to everyone she met. Her warm smile and caring personality will be sadly missed by all who met her but most of all there will be an ache in the hearts of her loving family. As she was slipping away, she said “Everyone get along and love each other. I love you all!” ‘Til we meet again. The funeral service will be held at SAAMIS MEMORIAL FUNERAL CHAPEL, #1 Dunmore Road SE, on Saturday, December 23rd, 2017 at 1:00 p.m. with Gary W. Goran officiating. In lieu of flowers, memorial gifts in Peggy’s name may be made to the Alberta Cancer Foundation, 710 – 10123, 99th Street NW, Edmonton, Alberta, T5J 3H1, or to Alberta Heart & Stroke Foundation, 340A Maple Avenue SE, Medicine Hat, Alberta, T1A 7L5 or to St. Joseph’s Home, 156 – 3rd Street NE, Medicine Hat, Alberta, T1A 5M1. Condolences may be sent through www.saamis.com or to condolences@saamis.com subject heading Peggy Plante. Funeral arrangements are entrusted to