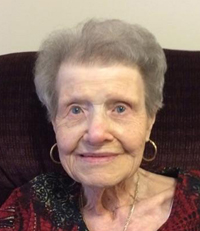 It is with sadness we announce the peaceful passing of a much loved wife, mother and grandmother after a long life, well lived. And what a life it was! Born and raised in London, England, she enrolled in the Women’s Auxiliary Air Force (WAAF) during WWII and met a handsome, Canadian soldier at a dance and the rest is history. They married on June 9, 1945, when the war ended and 10 months later she left her three siblings and widowed mother to join her husband in Canada and start a new life. What courage that took! That new life initially started on a farm in Saskatchewan with no electricity or running water… quite a shock for this big city girl. Their home was always open to their children, grandchildren and friends and was always a safe haven for anyone who needed it. The bonus was having one of the best cooks around in residence. Mom is survived by her children, Marie (Randy), Theresa, Anthony (Melanie), Michelle (Brent) and special family member, Raeann along with many adored grandchildren, and great- grandchildren. Mom was heartbroken by the loss of her son, Murray in 2012 and Jules, her husband of 71 years in 2016 and will now be reunited with them again. Mom will be greatly missed and forever remembered. In honouring her wishes, no public funeral service will be held and a private celebration will take place at a later date. In lieu of flowers, hug those you love and celebrate family! (Condolences may be expressed by visiting our website at www.cooksouthland.com) Honoured to serve the family is

One Condolence for “MONA KATHERINE WIEBE”