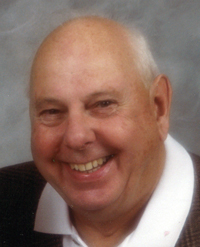 Mr. Victor Lloyd David Lutz, beloved husband of 60 years of Margaret “Peggy” Lutz of Redcliff, passed away on Tuesday, December 26th, 2017 at the Medicine Hat Regional Hospital at the age of 83 years. Victor also leaves to cherish his memory his son, Nelson (Darcie) of Slave Lake; his daughter, Patricia (Ken) Martin of Brownfield, AB; three grandchildren, Geoffrey, Olivia, and Natasha (Mark); as well as numerous nieces and nephews. Victor is predeceased by his parents, Frank and Florence; as well as three sisters and two brothers. Vic came to Redcliff from Niagara Falls in 1953 when he and two friends wanted to “see what the West was like”. He worked for several years at Dom Glass, then CHAT-TV for 20 years. He then worked as an engineer and was one of CHAT’s first employees. After leaving CHAT, Vic worked for Alberta Gas Chemicals before retiring. Vic spent much of his time volunteering for many different committees and organizations. He was a member of the Redcliff Lions Club for 45 years, Town of Redcliff representative on the Short Grass Library Board, Redcliff Golf Club executive, Redcliff Curling Club member and Municipal Planning Commission as a member of the Town Regulatory Board on Development as well as a member of Redcliff Library Board. Vic coached Nelson in Little League baseball, which was the start of his volunteerism. He was a member of the St. Ambrose Anglican Church. In 1994, Vic was awarded Volunteer of the Year for Redcliff and in 2007 he was awarded Citizen of the Year…both of which he was proud to accept. Vic enjoyed spending time with his grandchildren, golfing, and spending time with his many friends. There will be no funeral service at this time. A Celebration of Vic’s Life will be held at a later date. In lieu of flowers donations in Vic’s memory may be made to St. Ambrose Anglican Church Memorial Fund, 505 – 5th Street SE, Redcliff, Alberta, T0J 2P0 or to the Redcliff Public Library, P.O. Box 280, Redcliff, Alberta, T0J 2P0. Condolences may be sent through www.saamis.com or to condolences@saamis.com subject heading Vic Lutz. Funeral arrangements are entrusted to