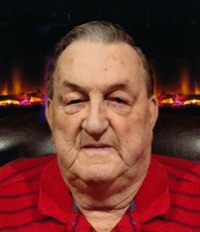 It is with heavy hearts that the family of Donald James Banks, beloved husband of 43 years to Margaret Partridge, announce his passing at the Medicine Hat Regional Hospital on Monday, December 25, 2017, at the age of 82 years. Along with Marg, Don leaves to cherish his memory: daughter, Dawn; son, Dayle (Cheryl); Margaret’s children, Jackie Porter (Laurie) and Vince (Kim) Partridge; grandchildren, Dale ’DJ’ (Nikki) Banks, Drew Henderson, Curtis Banks, Kyler Partridge, Darci Partridge; four great-grandchildren, many nieces, nephews and cousins as well as his special aunt, Bev in Campbell River. He was predeceased by his parents, Les and Jean as well as his brother, Barry. Don was born on March 25, 1935, in Deloraine, Manitoba. He played hockey as a young man and continued on in the hockey community. As a coach, Don had many successful teams with some of his players attaining NHL status. He and Marg had a passion for travel and golf and had many adventures throughout Canada, USA and Mexico with their highlight trip to Portugal in 1990. Don retired as a conductor from the CP Rail in 1990, following 33 1/2 years of service. Post retirement, he worked for Cottonwood Coulee Golf Course for many summers. Don loved spending time with family and friends as well as going for coffee, playing cards and reading. He had a love for animals, especially his black lab, Sam. One of Don’s greatest accomplishments was being a journeyman carpenter and building two homes alongside his son, Dayle. In honour of Don’s wishes, his life will be remembered without the proceedings of a formal funeral. If friends so desire, memorial donations in Don’s name may be made directly to the Heart & Stroke Foundation of Alberta, 124, 430 – 6 Avenue S.E., Medicine Hat, Alberta, T1A 2S8 or to the SPCA, 55 Southwest Drive S.W., Medicine Hat, Alberta, T1A 8E8.

“Standing at the station,

waiting for the last train home

Now the signals are all clear,

the switches have been aligned

It’s time for him to climb up

on the last train home,

for his final ride home.”

(Condolences may be expressed by visiting our website at www.cooksouthland.com) Honoured to serve the family is