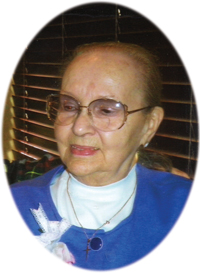 Elizabeth Madonna Burke of Medicine Hat, beloved wife of the late Virgel Burke, passed away on Saturday, December 23rd, 2017 at the age of 89 years. Elizabeth leaves to cherish her memory two sons, Bill (Teresa) Burke of Liberty Lake, Washington, and Gerry (Nella) Burke of Costa Rica; five grandchildren, Jintana (Michael), J. Thomas (Jessica), Cheryl (Dre), Natasha, and Dylan; eight great-grandchildren, Sharice, Jordan, Allyson, Jacob, Seth, Zach, Isaac, and Abram; one brother, Andy Reviczky; as well as numerous nieces and nephews. Elizabeth was predeceased by her husband, Virgel; her parents, John and Mary Reviczky; and her brother, John Reviczky. Elizabeth was born in Hodaz, Hungary on April 8th, 1928. She met Virgel and they were married on November 18th, 1957 in Great Falls, Montana. Elizabeth was a passionate hockey and baseball mother and was revered by the coaches and team members for her fried chicken. Elizabeth was the crown jewel of the Burke family and will be greatly missed by her family and friends. A Private Family Time of Remembrance will be held. Memorial gifts in Elizabeth’s memory may be made to the Shriner’s Hospital for Children, 1003 Decarie Boulevard Montreal, Quebec, H4A 0A9. Condolences may be sent through www.saamis.com or to condolences@saamis.com subject heading Elizabeth Burke. Funeral arrangements are entrusted to