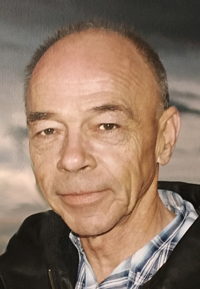 Our dad was born in 1947 in a little farmhouse near Mankota Saskatchewan to Nicholas and Eleanora Stengler. They named him Joseph, but everyone called him Joe. Growing up on the family farm, he learned not only the value of honest work well done, but also of the enduring value of family. He loved to laugh, but especially with his sisters Martha and Terri, and brothers Art and Steve.

As a young man he moved away from the farm to find his way in the world, when he met and later married our precious mom Doreen, in 1968. Just one year later, he would often remind us, man set foot on the moon. He loved space exploration.

Securing an engineering job at an Empress gas processing plant after the birth of his first son Lance, he moved his young family to Medicine Hat, where he put down deep roots. In quick succession his son Dean and daughter Natalie were born, with Kimberlie tumbling along after a seven year gap. Life became quite busy, and he carried a great pride and love for his family.

A lifelong learner, he was even alarmingly qualified to run a nuclear power plant. Not that he would ever boast, he simply didn’t like to draw attention to himself. From a young age, our dad taught us to have an intense curiosity about the world around us, as well as the importance of mercy. Even through our turbulent teenage years, when random friends would show up in the basement and we would make fools of ourselves, he poured out empathy for our weaknesses. And we carry not only a deep appreciation for his willingness to forgive, but we desire that his legacy of mercy would be reflected in our own families, to his numerous grandkids and beyond.

He loved his wife, his kids, his family, and his friends. Most significantly, though he would rarely talk of it, he entrusted himself and his family to God in faith and prayer. Confiding to his wife he would say, “We need to pray, because the only way things are going to work out is with God.” We’re going to dearly miss him.

Thank you, Dad, for living your life well. We love you.

A Vigil Prayer Service will be held at Cook Southland Funeral Chapel, 901 – 13 Street S.W., Medicine Hat on Sunday, January 7, 2018, at 7:00 p.m. The Funeral Mass will be celebrated at Holy Family Parish, 1451 Strachan Road S.E., Medicine Hat on Monday, January 8, 2018, at 11:30 a.m. with interment to follow at Hillside Cemetery and a reception thereafter in the Parish Hall. (Condolences may be expressed by visiting our website at www.cooksouthland.com) Honoured to serve the family is

One Condolence for “JOSEPH STENGLER”