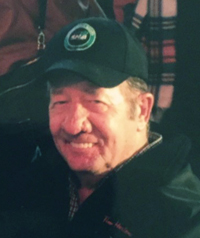 At age 71, Allan Dean Moser passed away on Wednesday January 3, 2018. Allan was born in Regina, Sask. on May 2, 1946. He spent his younger years in Fox Valley and Golden Prairie, moving into Maple Creek at the age of 8. After graduating from high school, Allan went to college in Lethbridge where he completed his diploma in Business Administration. After living briefly in Calgary and Kitimat, he moved back to take over the family farm near Golden Prairie, which he farmed until age 65. After moving back to Maple Creek he met and married Gayle Myers in 1970, and they had 4 boys. Allan was passionate about sports throughout his lifetime, competing in track and field, baseball, curling, and golf. He also loved to hunt with his good friend Dave Leslie. For many winters he enjoyed ice making and draw making duties at the Maple Creek Curling Club. He was a member of the Maple Creek Elks Club and competed in the National Elks Curling Championships on numerous occasions, winning it once. He is survived by his loving wife of 47 years, Gayle and their four sons and their families: Darren (La Costa), Reylen; Dean, Emma, Kayla; Don (Danielle) Bradley, Kassidy; and David (Shelby). Also surviving is his sister Marg Wiebe of Calgary AB, sister-in-law Elizabeth Moser of Kitimat BC, brother-in-law Dick (Juliette) Myers of Morden MB, sister-in-law Ann Renee (Ray) Pettyjohn of Nelson BC, as well as numerous nieces and nephews. Predeceased by his parents, Roy and Hilda Moser, brother Robert, infant sister Lila, nephew Rod Sauer, in-laws Arthur and Helma Myers, and brother-in-law Jake Wiebe. Funeral service to be held Tuesday, January 9, 2018 at 11:00am at St. Lawrence Roman Catholic Church, Maple Creek, SK. Binkley’s Funeral Service in charge of arrangements. In lieu of flowers, donations may be made to the Maple Creek Curling Club or to the Southwest Healthcare Trust Fund, c/o Cypress Credit Union. Condolences can be offered to the family at www.binkleysfuneralservice.com