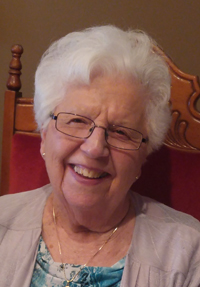 Edna Olinda Herringer, beloved wife of the late Oscar Herringer, went home to her Lord and Saviour on Friday, January 5, 2018 at the age of 89 years. Edna, who was so eager to go home to heaven, passed away quietly in her sleep.

She was predeceased by her husband Oscar Herringer, her parents and fourteen brothers and sisters.

Edna was born April 3, 1928 to Michael and Magdelina Bauer. She was raised on the family farm east of Schuler, Alberta near Surprise, Saskatchewan. It was during these growing up years that Edna developed her deep faith in God. She moved to Medicine Hat in her late teens where she started working at Woolworth’s. It was in Medicine Hat that Edna met the love of her life, Oscar Herringer, whom she married on October 18, 1947. Their son Bryan was born in 1949 and their daughter Shauna in 1953. Edna loved life. She so enjoyed her friends and family no matter where life took them. They moved from Medicine Hat to Taber in 1966 followed by a move to Lethbridge in 1997 and finally to Calgary in 2012. In each of these locations Edna developed and enjoyed close friendships. Relationships mattered to Edna.

Edna was a great cook. She even got a Scotsman to enjoy sauerkraut! People would drive for miles to enjoy her home cooked meals and desserts. There was nothing that Edna enjoyed more than a good party with her friends.

The Funeral Service will be held at Knox United Church, 4929 – 50 Avenue, Taber on Friday, January 12, 2018 at 1:00 P.M. Condolences may be forwarded by visiting our website at www.southlandfuneral.com.

If friends so desire, memorial tributes in Edna’s name may be made directly to the Heart and Stroke Foundation of Alberta, Box 2211, Lethbridge, Alberta T1J 4K7 (www.heartandstroke.ca).