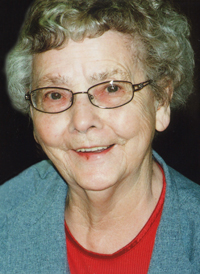 Irma Germain Major, beloved wife of the late Bruce Major, passed away in Bow Island on Thursday, January 4, 2018 at the age of 89 years.

The Funeral Service will be held at the Evangelical Free Church, 214 – 4 Avenue West, Bow Island on Thursday, January 11, 2018 at 2:00 P.M. Burial to follow at the Bow Island Cemetery. Condolences may be forwarded by visiting our website at www.southlandfuneral.com.

Irma was born to Gillon and Mary DeZaeyer in Lac La Nonne, Alberta on February 4, 1928. She spent her early life helping on the family farm and caring for her dad and two brothers after her mom passed away in 1948. Irma met Bruce at a Farmer’s Day picnic and got married on March 25, 1949 in Onoway, Alberta. Irma happily spent her years as Bruce’s helpmate, whether it was doing housework, raising children, tending animals or working out in the fields.

One Condolence for “IRMA MAJOR”