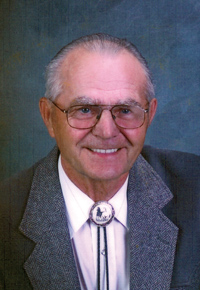 Fred Mack of Medicine Hat, beloved husband of Emma, passed away peacefully on January 14th, 2018 surrounded by his wife and family at the age of 88 years. Besides Emma, Fred leaves to cherish his memory, his daughter Lorrie (Paul) Guenard, and his three sons Terry (Melanie), Murray (Tammy) and Frederick “Darren” (Michelle). Also cherishing their grandpa are his ten grandchildren; Amy, Heather, Amber (Scott), Tyler, Troy, Cole, Meghan, Frederick “Braden”, Kiera and Jerika and his great-granddaughter Kinsley. He also leaves to mourn two sisters-in-law, and numerous nieces and nephews. Fred was predeceased by his parents, Frederick and Christina Mack; his four brothers, John, Archie, Albert and William; and two sisters, Martha (Chris) Seitz and Emma. Fred was born on the family farm on March 21st, 1929 in the Ranchville area where he was raised and educated. In his early years Fred left home to work on neighboring farms, eventually returning to the family farm. In the summer of 1957 Fred met the love of his life Emma Jetter and they were married on August 2nd, 1958. He and Emma shared 59 years of marriage while raising their family on the farm and ranch at Ranchville. Fred’s love for the farm did not diminish with age as he was actively involved in the farm and continued to hay and run the combine well into his 80’s. The Mack family wishes to thank the nurses and staff on 5 East at the Medicine Hat Regional Hospital for the care and comfort that they provided Fred in his last days. The family also wishes to thank Patricia and the caregivers from Alberta Health Services for the respite care given to Fred over the past two years. The funeral service will be held at VICTORY LUTHERAN CHURCH, 2793 Southview Drive SE on Saturday, January 20th, 2018 at 1:00 p.m. with Pastor Jim Bredeson and Diaconal Minister Lila de Waal officiating, with a luncheon to follow. A private family interment at Hillside Cemetery will take place prior to the funeral service. In lieu of flowers and as an expression of sympathy donations may be made to the charity of one’s choice in Fred’s name. Condolences may be sent through www.saamis.com or to condolences@saamis.com subject heading Frederick Mack. Funeral arrangements are entrusted to