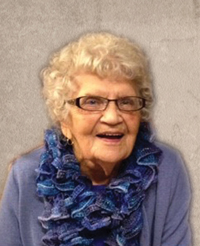 Ann Marie Vetter of Medicine Hat, beloved wife of the late Peter Vetter, passed away on Sunday, January 14th, 2018 at the age of 96 years. She leaves to cherish her memory five children, Jane (George) Plaksey, Tom (Maria) Vetter, Marilyn Davidson, Norbert (Cindy) Vetter, and Donna (Rohdy) Hay; ten grandchildren, Shelly (Robert) Harvey, Cheryl (Kevin) Kalmring, Kevin Plaksey, Michael (Krista) Vetter, Jeffrey Vetter, Heather (Lanny) Wheeler, Erin Davidson, Kayla Vetter, Zachary Hay, and Jennifer Hay; five great-grandchildren, Braden Kalmring, Brooklynn Kalmring, Dakota Vetter, Tianna Vetter, and Carly Wheeler; four sisters and one brother, Eleanor Graham, Laura Rissling, Kay Gillis, Carol Leibel, and Leo Boser; six sisters-in-law; as well as numerous nieces and nephews. Ann was predeceased by her husband, Peter Vetter in 2008; her parents, John and Marion Boser; five brothers; and two sisters. Ann was born on the family farm near Reward, located in the Unity District, Saskatchewan. It was there that she grew up and attended the one-room school nearby. After her schooling, she worked on various farms in the district as a housekeeper. Ann met her future husband, Pete, in the Reward area and they were married there on October 14th, 1946. They lived in Reward until 1960, when they moved to Medicine Hat. In 1968, Ann went to work at the Medicine Hat Hospital employed as a dietary aid until 1979. Ann’s passions in her long and active life were her family, preparing everyone’s goodies when visiting, gardening, crocheting and lengthy long-distance calls with her sisters. Ann and Pete’s retirement years were spent at home in their park-like backyard enjoying Medicine Hat’s lovely summer weather, visits with their many family members, and enjoying each other’s company. In 2014, Ann moved to Meadowlands Retirement home where she remained until the time of her passing. Those wishing to pay their respects may do so at SAAMIS MEMORIAL FUNERAL CHAPEL, #1 Dunmore Road SE, on Sunday from 3:00 to 5:00 p.m. and at ST. PATRICK’S ROMAN CATHOLIC CHURCH, 238 – 2nd Avenue NE, on Monday from 10:00 to 10:55 a.m. The Funeral Mass will be celebrated at ST. PATRICK’S ROMAN CATHOLIC CHURCH on Monday, January 22nd, 2018 at 11:00 a.m. with Father Francis Tran, Celebrant. A Private Interment will take place in the family plot at Hillside Cemetery. In lieu of flowers, memorial gifts in Ann’s memory may be made to the Alberta Heart & Stroke Foundation, 340A Maple Avenue SE, Medicine Hat, Alberta, T1A 7L5. Condolences may be sent through www.saamis.com or to condolences@saamis.com subject heading Ann Vetter. Funeral arrangements are entrusted to