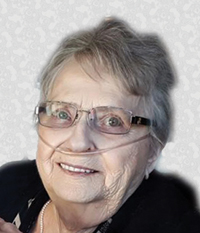 Eleanor was born on March 21st, 1935 in Rama, Saskatchewan and was raised by her grandparents on their farm where she developed her love for tending to gardens and cooking. She faced many hardships in her life but she always persevered with grace and beauty. Her greatest success was by far her family and she loved them fiercely. Eleanor will be remembered for having a giggle that was contagious, a smile that was enchanting, a hug that made the world melt away, and an empowering love. This is a time of celebration, a celebration of her amazing life that was lived to the fullest and a celebration of her newest adventures as an angel. The funeral service was held at SAAMIS MEMORIAL FUNERAL CHAPEL, #1 Dunmore Road SE, yesterday, January 24th, 2018 with Father John L. Maes officiating. Interment was held at Saamis Prairie View Cemetery. Those wishing to make a donation may do so to Canadian Cancer Society, 325 Manning Road NE, Calgary, Alberta T2E 2P5 or to Alberta Heart & Stroke Foundation, 340A Maple Avenue SE, Medicine Hat, Alberta, T1A 7L5 or to Canadian Diabetes Association, 220, 6223 – 2 Street SE, Calgary, Alberta, T2H 1J5. Condolences may be sent through www.saamis.com or to condolences@saamis.com subject heading Eleanor Romaniuk. Funeral arrangements were entrusted to