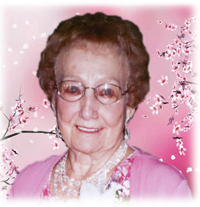 Mrs. Georgina (Jean) Blanchard, beloved wife of the late George Blanchard, passed away on Thursday, January 25, 2018, at the age of 95 years. Jean leaves to cherish her memory: three children, Gwen (late Gordon) Heisler, Eldon (Sharon) Blanchard and Dennis (Lorraine) Blanchard. Jean’s memory will be lovingly cherished by her seven grandchildren, Murray (Lisa) Heisler and their children, Kaleigh and Kristen; Graham (Renita) Heisler and their children, Georgia and Tytan; Cheryl (Jamie) Smithson and their children, Nathan, Mathew, Zachary and Celsey; Murray Blanchard, Paul Blanchard and Katherine Blanchard as well as numerous nieces, nephews and cousins. She was predeceased by her parents, George and Margaret Fortney; siblings, Earl, Carl, Jerry, Walter, Brother Francis, Bernadette Hesch and Doris Gillman as well as numerous in-laws. Jean was born on May 25, 1922, in Gull Lake, Saskatchewan and grew up on the family farm near Simmie, Saskatchewan. She married George Blanchard on April 21, 1942 and thereafter devoted her life to her family while supporting George’s life on the railroad as a CPR Conductor. Jean’s favorite activities included fishing, golfing, darts, playing softball and square dancing. She had a strong Catholic faith and was a long-time member of the C.W.L. Jean’s family meant everything to her and she always made sure that each and every member of her family knew how much they were loved. She was well known for creating a home environment where everyone was welcome and she will be dearly missed by all those who had the privilege of sharing in her life. Those wishing to pay their respects may do so at Cook Southland Funeral Chapel, 901 – 13 Street S.W., Medicine Hat on Sunday, January 28, 2018, between 6:00 p.m. and 6:55 p.m. with Vigil Prayers following at 7:00 p.m. Visitation will also be offered at the church starting one hour prior to the Funeral Mass which will be celebrated at St. Patrick’s Roman Catholic Church, 238 – 2 Avenue N.E., Medicine Hat on Monday, January 29, 2018, at 1:00 p.m. with Reverend Father John L. Maes celebrant. Interment will follow at Hillside Cemetery with a time of fellowship thereafter in the Parish Hall. (Condolences may be expressed by visiting our website at www.cooksouthland.com) Honoured to serve the family is Cook Southland Funeral Chapel, 901 – 13 Street S.W., Medicine Hat, Alberta T1A 4V4. Phone 403-527-6455.

One Condolence for “GEORGINA (JEAN) BLANCHARD”