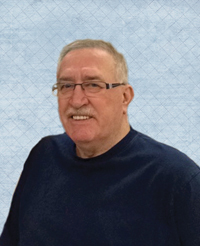 We are devastated to announce the sudden passing of an amazing man, husband, father, grampa and “Best Buddy”. Dad passed away February 13, 2018 in Medicine Hat, AB at the age of 72 years. Dad was born to Elizabeth and Henry Mohninger in Humboldt, SK. and grew up in St. Brieux, SK. He met mom in Saskatoon and they married on February 27, 1975. In 1976, they moved to Fort McMurray, AB. where dad eventually became a heavy equipment operator with Suncor. He worked there for 30 years. In 2007, they followed us out of Fort McMurray and retired to Medicine Hat. Dad was an avid sports-fan with a great sense of humor. His family describes him as fun loving, patient and kind. He was always there to listen and always knew what to say. He was a hard working man and enjoyed the simple things in life. Dedicated to his family, he will be missed beyond belief. He leaves “The Crew” behind to carry on his memory – Vivian (Giles), his faithful, devoted wife of 43 years, their daughters Angela (Wayne) Daviduck and Sheri (Tom) Power, and the most important, his grandkids, Shilah, Erik, Meagan, Mylie, Nick, Megan and loyal dog Joey. He will be greatly missed by his siblings Elmer (Kathy) Mohninger, Carol Judge, and brother-in-law Doug Brooks. As well as Vivian’s siblings Roberta Giles, George (Janet) Giles, Albert (Carol) Giles and Darleen (Fred) Bowles, their families and his father in law Art Bentley. Dad loved, and was loved. There are many nieces, nephews, cousins, friends and extended family that share in our grief. He was predeceased by his parents Elizabeth and Henry, his sisters Adeline Brooks, Joyce Antoniuk, and Leona Nagy and his brothers in law Nick Antoniuk and Joe Nagy, as well as his mother in law Anna Bentley. A private celebration of life will be held. Memorial gifts in Don’s memory may be made to the Canadian Diabetes Association, 220, 6223 – 2nd Street SE, Calgary, Alberta, T2H 1J5 or to the Alberta Heart & Stroke Foundation, 340A Maple Avenue SE, Medicine Hat, Alberta, T1A 7L5. Condolences may be sent through www.saamis.com or to condolences@saamis.com subject heading Donald Mohninger. Funeral arrangements are entrusted to

One Condolence for “Don Mohninger”