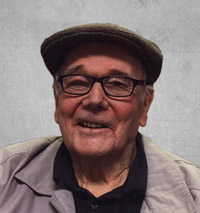 Donald “Don” Anthony Cannon of Medicine Hat, passed away on Saturday, February 17th, 2018 and has joined his beloved wife, Audrey “Dene” (of Abbeville, Louisiana) in Heaven, at the age of 93 years. Don leaves to cherish his memory one daughter, Florence “Flo” (Tim); two sons, Vince and Anthony “Tony”; his loving grandchildren and great-grandchildren; sisters-in-law, Hazel and Maxine in Canada; and Dale Hebert Monroe, Rita Hebert and Nancy Hebert in the USA; as well as numerous nieces, nephews and friends. Don was predeceased by his parents, Charles and Lucy Cannon of Marquis, Saskatchewan; his only sister, Catherine; and brothers, Harry, Arthur, Bernard, George and Kenneth; sisters-in-law, Jenny and Rita in Canada; and brothers and sisters-in-law, Clayton, Murphy, Jimmy, Bonnie, Mary Alice, and Louise Hebert and Dale Monroe in the USA. Don was born in Moose Jaw on October 28th, 1924. He was raised on a farm in Marquis, attending St Mark’s elementary and Marquis Public High School and his first year of Arts at St. Thomas College in Battleford, Saskatchewan. He then joined the Oblates of Mary Immaculate in 1944, spending a year in Winnipeg with them and returned to Battleford in 1945 for 7 years of further studies, graduating in 1952. His Missionary work began in Northern British Columbia and the Yukon. Much of his Missionary work was with the Aboriginal Community visiting Missions by dog teams and walking as far away as 180 miles from home base. After twenty years of Missionary work Don made a career change. Don met his future wife Dene at Divine World Centre in London, Ontario. After receiving his Laicization from Rome, Don and Dene were married in St Mary’s Church in Prince George, BC on March 9, 1973. In 1975 Don and Dene wanted to build a family and adopted their daughter and two sons, ages 9, 7 and 6. Don worked at Northwood Pulp and Timber until he retired in 1987. In 1988, Don and Dene moved to Vernon, BC and remained there until 1997 when they moved to Medicine Hat, Alberta. Both enjoyed traveling, spending time on the golf course and playing cards with friends and relatives. Those wishing to pay their respects may do so at SAAMIS MEMORIAL FUNERAL CHAPEL, 1 Dunmore Road SE, on Sunday from 6:00 until 9:00 p.m. Vigil Rites (Prayers) will be held at SAAMIS MEMORIAL FUNERAL CHAPEL, on Sunday, February 25th, 2018, at 7:00 p.m. The Funeral Mass will be celebrated at HOLY FAMILY PARISH, 1451 Strachan Road SE, on Monday, February 26th, 2018 at 10:30 a.m. with Father Albert Sayson, Celebrant. Interment will follow at Saamis Prairie View Cemetery. Memorial gifts in Don’s memory may be made to the Canadian Cancer Society, 325 Manning Road NE, Calgary, AB T2E 2P5 or to the charity of one’s choice. Condolences may be sent through www.saamis.com or to condolences@saamis.com subject heading Don Cannon. Funeral arrangements are entrusted to