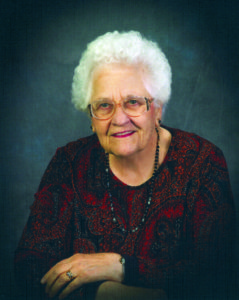 Irma was born on February 7th, 1928, the only daughter and the youngest of four to Edward and Florence Bennett on a farm in Glasford, south of Orion, Alberta. She received the majority of her education at Pakowki School and Alexandra High School in Medicine Hat. She married Albert Mack on October 13th, 1948. Albert and Irma and later their son, Gerald, operated a successful farm in the Ranchville area. Irma was an active member of the Orion W.I. and an excellent cook, winning many awards for her baking. In 1988, Albert and Irma moved to Medicine Hat, but still continued participating in the farming activities for a few years until they fully retired. They enjoyed socializing with their many friends and became devoted members of Victory Lutheran Church. Irma continued to live in her home even after Albert’s passing in 1996, being with friends, attending community functions and participating in the activities of Victory Lutheran Church. Irma moved from her home to Chinook Village in 2013 when her health began to deteriorate and only recently moved to the Good Samaritan Society’s Southridge Village. Irma Ethelyn Mack passed away peacefully on Saturday, February 24th, 2018 days after celebrating her 90th Birthday. Irma was predeceased by her parents; her husband, Albert; three brothers, Doug, Donald and Lester Bennett; and one grandson, Christopher Mack. Irma leaves to cherish her memory her son, Gerald (Dale) Mack; two grandsons, Rory (Marlene) Mack and Kirk (Heidi) Mack; as well as six great grandchildren, Kyle, Kennady, Troy, Drinnan, Relaile and Dritan. Her family would like to thank the staff of both Chinook Village and South Ridge Village for their kindness, care and patience over the past few years. The Funeral Service will be held at VICTORY LUTHERAN CHURCH, 2793 Southview Drive SE, on Thursday, March 1st, 2018 at 3:00 p.m. with Diaconal Minister Lila de Waal and Reverend Jim Bredeson co-officiating. A private interment will take place at Hillside Cemetery. Memorial gifts in Irma’s memory may be made to HALO, 12 – 49 Viscount Avenue SW, Medicine Hat, Alberta, T1A 5G4. Condolences may be sent through www.saamis.com or to condolences@saamis.com subject heading Irma Mack. Funeral arrangements are entrusted to