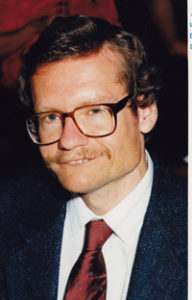 Malcolm Austin Schlenker passed away peacefully on March 8, 2018 at Menno Hospital in Abbotsford. Malcolm was born on Dec. 26, 1949 in Medicine Hat, AB.

He was predeceased by his parents May and Elmer. He is survived by his siblings and their spouses, sister Idamay Schlenker and brothers Ric (Janet) Schlenker, Donald (Adde) Schlenker (children Brendan and Brittany), Robert Schlenker and John Schlenker.

Malcolm graduated from SAIT in Calgary, AB as Commercial Cook then moved to Vancouver. He worked for Hotel Vancouver for 42 years.

He was interested in astronomy (onetime member Royal Astrological Society). He liked rock collecting and had an extensive collection in display cases. He liked to build model planes, particularly gliders.

A Memorial Service will be held at Menno Chapel at 32945 Marshall Rd, Abbotsford BC on April 10 at 3:30pm. He will be interned at Forest Lawn Memorial Park, Burnaby.

The family sends special thanks to the staff at Menno Hospital for their excellent care of Malcolm.

In lieu of flowers, please donate in Malcolm’s name to The Alzheimer Society of Canada.

Online condolences to the family may be made at www.woodlawnfh-abbotsford.com