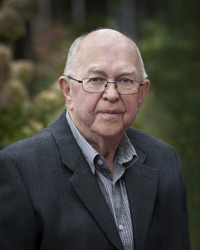 Everett Vander Heiden, beloved husband of Cathy Vander Heiden of Medicine Hat, passed away on Friday, March 23, 2018, at the age of 84 years. Besides his wife, Cathy, Everett leaves to cherish his memory six children, John (Carmen), Leroy (Kerrie Gauthier), Rita (Doug) Scott, Everett (Maryann), Evelyn (Joe Seitz) and Michael (Nancy); eleven grandchildren, Tyler (Rachel Krueger), Jacqueline (Brad Steinke) and Cory, Daniel and Sara (Jessie) Andreas, Samantha Scott, Thomas and Aidan Seitz, Dylan (Erica Neigum), Madison and Mackenzie; three great- grandchildren, Jordan Vander Heiden, Cole and Carter Andreas; two sisters, Tine (John) De Groot and Eveleen van der Heiden as well as two sisters-in-law, Mary Hendriks and Miep van der Heiden-Terhorst. Everett was predeceased by his parents; two brothers, Pieter and Gerard and two grandchildren, Mitchell Scott and Cole Vander Heiden. Together with three friends, Everett immigrated to Canada in 1954 with the hopes of pursuing a life of agriculture. Life had its own path and in 1956, he landed a job with a drywall company. He travelled extensively through BC, AB and SK driving every back road, working in many small towns and meeting many people along the way. In 1960, he met and married the love of his life Cathy. Together they settled in Medicine Hat where they raised their family. He had an extensive career in the construction industry including his own company Everett’s Drywall, started in 1968 then moving to the construction supply industry with Medicine Hat Drywall Supply in 1986, until his retirement in 1995. Everett actively volunteered throughout his life. While family was important, he believed in supporting the community he lived in, not for recognition, but for the greater good. As a member of St. Patrick’s church council he was instrumental in the restoration of the church. He was also a proud member of the Knights of Columbus for more than 50 years, serving as Grand Knight in 1978 and again 2002-04. As a member of the Medicine Hat Construction Association for over 25 years, he served as president in 1987. Everett enjoyed volunteering with the Medicine Hat Bingo Association, the Knights of Columbus, Camp McCoy, and delivering Meals on Wheels. He enjoyed many hobbies including tending to yard and garden, featured several times on the Garden Tour of the Medicine Hat & District Horticultural Society, curling and travelling. Everett and Cathy traveled with their fifth wheel, wherever possible. They journeyed through Canada, the US, including Alaska, Mexico, Panama and all seven Central American countries. They also travelled to Europe, the UK, Hawaii, Fiji, New Zealand, Argentina and Chile. He also enjoyed fishing with his children and friends. A highlight was a trip to the Queen Charlotte Islands with his son Everett. Family are thankful to relatives and friends who have always been close by and supported them through this difficult time. (Condolences may be expressed by visiting the Funeral Home’s website at www.cooksouthland.com) Vigil Prayers will be recited at Cook Southland Funeral Chapel, 901 – 13 Street S.W., Medicine Hat on Sunday, April 1, 2018, at 7:00 p.m. The Funeral Mass will be celebrated at St. Patrick’s Catholic Church, 238 – 2 Avenue N.E., Medicine Hat on Monday, April 2, 2018, at 11:00 a.m. with Reverend Father John Maes celebrant. Interment will follow at a later date. Those wishing to remember Everett may do so through a donation to Camp McCoy, Box 40028, 355 Southridge Drive S.E., Medicine Hat, Alberta, T1B 4S6. Honoured to serve the family is