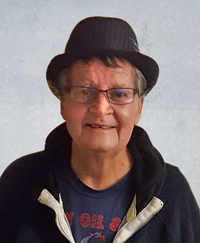 Robert “Fuzzy” Lorne Both of Medicine Hat, passed away on Thursday, April 19th, 2018 at the age of 62 years. Fuzzy leaves to cherish his memory his three brothers, Norman Scherer, David Both (Betty) and Roy Both; two sisters, Maxine Darbel and Sharon Adams; his step-brother, Harvey Turner (Leia); step-sister, Lori Turner (Rolly); as well as numerous nieces and nephews. Fuzzy was predeceased by his father, Frank Both; his mother and step-father, Viola and Harold Turner; and two sisters, Judy “Tootsie” Both and Shirley Plunkett. Fuzzy was born on May 6th, 1955 in Calgary, Alberta and lived in Acadia Valley for a short time before moving with his family to Medicine Hat. He worked for numerous years at BYZ Construction and BYZ Enterprises and was very thankful for all they did for him over the years. Although Fuzzy didn’t have any of his own children, he played a major role in the upbringing of his nieces and nephews. Fuzzy was an avid gardener and loved to make knoephla, potato and sauerkraut dinners for his family. In the last year, Fuzzy also enjoyed attending First Assembly Church and found the love of Jesus. Those who were fortunate enough to know Fuzzy will always remember him as mischievous, caring, eccentric and generous to a fault. Fuzzy’s home for the last few years was the Medicine Hat Regional Hospital and his family would like to thank the doctors, nurses and staff, especially 5 East, for the compassion and care that Fuzzy received during his time there. Those wishing to pay their respects may do so at SAAMIS MEMORIAL FUNERAL CHAPEL, 1 Dunmore Road SE, on Monday from 7:00 until 9:00 p.m. The Funeral Service will be held at FIRST ASSEMBLY OF GOD, 395 – 9th Street SE, on Tuesday, April 24th, 2018 at 1:30 p.m. with Reverend George Koopmans and Pastor Matthew Redstone co-officiating. A private interment will take place at Hillside Cemetery. In lieu of flowers, memorial gifts (monetary or other) in Fuzzy’s memory may be made to Canadian Blood Services, 1800 Alta Vista Drive, Ottawa, Ontario, K1G 4J5. Condolences may be sent through www.saamis.com or to condolences@saamis.com subject heading Fuzzy Both. Funeral arrangements are entrusted to SAAMIS MEMORIAL FUNERAL CHAPEL CREMATORIUM & RECEPTION CENTRE, “The Chapel in the Park” #1 Dunmore Road SE, Medicine Hat, AB T1A 1Z5 (403)528-2599 www.saamis.com inquiry@saamis.com Locally owned and directed CGR Holdings Ltd.