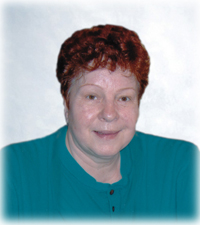 Marija Maltby, beloved wife of Ken Maltby, passed away on Wednesday, April 25, 2018, in Redcliff at the age of 77 years. Along with Ken, Marija leaves to cherish her memory her children, Jasmina (Stewart) Scheuerman and their children, Mitchell and Savannah; Elaine van Montfort and her daughter, Rowan and Marc (Amanda) van Montfort and their children, Erikson, Keaton and Beau; special friend and the father of Marija’s children, Peter van Montfort. Marija is also survived by her family in Slovenia, sister, Lojzka; niece, Sergeja; nephew, Goran; three aunts as well as one uncle. Marija was predeceased by her parents, Oswald and Marija Breznik; sister, Sela as well as her baby brother, Oswaldchuk. Marija was born on January 17, 1941 in Ravne na Koroskem, Slovenia.On Marija’s second attempt to escape the former communist country of Yugoslavia, she chose Canada as her new home. Marija immigrated to Toronto in 1961 and moved to Medicine Hat on Halloween in 1975. In earlier years, she enjoyed macramé, ceramics pettipoint, crocheting and sewing. She was later employed with Canada Post for 21 years retiring in 2006. Marija loved her job and took great pride in her work. Ken and Marija were married on January 17, 1994 and had many good times together. She enjoyed travelling to her home country of Slovenia and receiving company from Europe. Her door was always open. She enjoyed watching movies and cooking but her most memorable times were spent with her family. Marija’s children and grandchildren were the apple of her eye. She was a caring and loving mother who will be missed immensely! A private celebration of Marija’s life will be held at a later date. In lieu of flowers, memorial donations may be made to the Alberta Lung Association, 208 – 17420 Stony Plain Road, Edmonton, AB, T5S 7K6. (Condolences may be expressed by visiting www.cooksouthland.com). Honoured to serve the family is