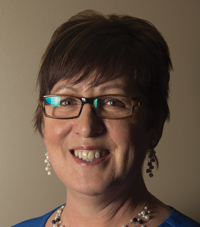 Angelina “Angie” Bassendowski, beloved wife of Steven Bassendowski of Medicine Hat, passed away on Monday, April 30th, 2018 at the age of 58 years. Angie also leaves to cherish her memory two daughters, Nancy Bassendowski (Jon Sookocheff) and Crystal (Layne) Ardell; five grandchildren, Gwendolyn, Eleonora and Marsden Sookocheff and Isabella and Scarlette Ardell; one sister, Florence (Darrell) Hill; two brothers, Gerald (Jan) Zimmer and John (Esther) Zimmer; her father-in-law, Rudy Bassendowski (Berua Kazuik); her sister-in-law, Sharon (Gene) Cochrane; her brother-in-law, Rick Bassendowski; as well as numerous nieces and nephews. Angie was predeceased by her father, Leo Zimmer; her mother, Katherine Zimmer; her step-mom, Mary Zimmer; her granddaughter, Leia Ardell; and her sister, Cecilia Zimmer. Angie was born on December 31st, 1959 and was raised and educated in Luseland, Saskatchewan. She married Steven on October 6th, 1979 in Kerrobert, Saskatchewan and together they moved to various places in Saskatchewan before settling in Consul, Saskatchewan, later moving to Medicine Hat. Angie enjoyed camping, reading and scrapbooking. What she loved above all was spending time with her family, especially her grandchildren. In lieu of flowers, memorial gifts in Angie’s memory may be made to the Charcot-Marie-Tooth Association – http://charcotmarietoothc.wixsite.com. Condolences may be sent through www.saamis.com or to condolences@saamis.com subject heading Angie Bassendowski. Funeral arrangements will be announced when completed by