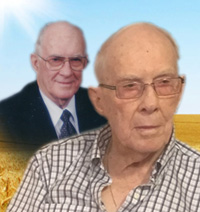 John Franklin Rogers passed away on April 29, 2018, at the age of 93 years. He is survived by his son, Murray (Julie) Rogers of Bindloss; daughters, Janet (Fred) Kelln and Lorna (Gary) Turner both of Medicine Hat; five grandchildren; nine great-grandchildren; sisters, Flora Anhorn, Grace Newbert, and Glennis (Ken) Lewis; brother, Allan Rogers and sister-in-law, Viola Stephenson and their families. Franklin was predeceased by his wife, Jean; son, Keith; parents, Dryden and Thelma Rogers; granddaughter, KariAnn Jasssund; sister, Madeleine Rutz; brother, Arnold Rogers; brothers-in-law, Al Rutz, Frank Newbert, Don Anhorn and Clarence Stephenson; sister-in-law Lorna Rogers as well as four brothers and sisters in infancy. Franklin was born in Empress, Alberta and was raised on the farm at Bindloss. He received his education at the Forks School and Leland High School and then farmed in the district. He enjoyed playing sports, especially curling; senior slo-pitch and watching the Blue Jays. A private family interment will be held with Dr. Shane Andrus officiating. As an expression of sympathy donations may be made to the charity of one’s choice. (Condolences may be expressed by visiting our website at www.cooksouthland.com) Honoured to serve the family is