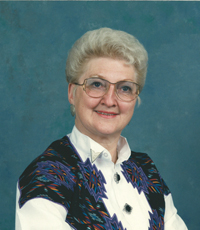 Gladys Edith (Sheward) Anderson, beloved wife of the late Eric Anderson, passed away peacefully on Friday, May 18th, 2018 surrounded by family and friends at the Medicine Hat Regional Hospital. Gladys was born in Medicine Hat on January 10th, 1940 to Fred and Doris Sheward, a sister for Jim. She attended Elizabeth and Elm Street Schools and from seven years of age, she grew up living on the Stampede Grounds, maybe where her fascination for the cowboy life was triggered. Her working history was intertwined with her social life, for Gladys was interested in people, never hesitating to engage in conversation. Her memory for the people she met–incredible. She worked at Woolworth’s 1956-1969, OK Economy 1969-1976, Crescent Heights Pharmacy 1976-1982, Sept’s Drugstore 1982-1983, and Woolco 1984-1994. Thirty-eight years of work which she was very proud of.

She married the love of her life on August 31st, 1963 for the next 46 years they enjoyed all life had for them including rodeo, Polka-fests, Tiger hockey games, travelling to 10 different countries, many nights at the Moose, attended the NFR in Las Vegas (18 years in a row) and in Edmonton, camping and socializing with relatives and friends. Although she had no children of her own, she demonstrated that family was important to her, in her dedication to her mom and the Anderson family history, which she and Eric collected and recorded in her meticulous albums. Leaving a very important legacy for us to cherish.

A lot can be said about a person by the friends they have, and Gladys had many, but certainly her long-time friend Alfreida Vorra and her family have held a special place in her heart and instrumental in her quality of life especially the past nine years. For example, all of the holiday dinners and Tiger hockey games that Don took her too, they were hi-light evenings. This year Gladys and Don were even featured on the Kissing Cam! Gladys kept busy and continued her love of dancing, even line dancing up to a year ago. For the last five years Gladys has been a resident at Meadowlands where her outgoing, adventurous personality encouraged both her peers and the staff, she was a participator and that really accentuated her life’s motto—’living life to the fullest’ and as she said on her last days, “I’ve had a good life–but I miss my family”.

There are many more things that could be shared about Gladys, her amazing organization and recording skills, her taste for beautiful clothes and jewelry, her pride and care of her home and appearance, but the most precious was her memory for people and their names, after all isn’t that honouring those we meet and care about. She was predeceased by her husband, Eric; her parents, Fred and Doris Sheward; her brother, Jim Sheward; brothers-in-law, Bobby, Eddy, Donald and Lee Anderson, Roy Chesney, George Simpson, and Art Sheward; and sisters-in-law, Diane Sheward, Florence Anderson, Annabelle Sheward, Mildred Simpson, and Leona Chesney.

Those wishing to pay their respects may do so at SAAMIS MEMORIAL FUNERAL CHAPEL, 1 Dunmore Road SE, on Friday from 7:00 until 9:00 p.m. and on Saturday from 1:30 until 2:25 p.m. The Funeral Service will be held at SAAMIS MEMORIAL FUNERAL CHAPEL, on Saturday, May 26th, 2018 at 2:30 p.m. with Dr. David J. Carter officiating. Interment will follow at Hillside Cemetery. In lieu of flowers, memorial gifts in Gladys’s memory may be made to a charity of one’s choice. Condolences may be sent through www.saamis.com or to condolences@saamis.com subject heading Gladys Anderson. Funeral arrangements are entrusted to