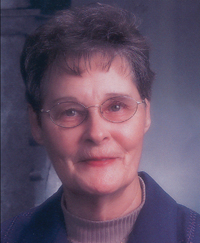 Phyllis Janke of Medicine Hat, beloved wife of Clarence Janke, passed away on Monday, June 4, 2018, at the age of 91 years. Phyllis is survived by two sons, Tom Glynn of Warner and David Glynn of Saanichton, BC; three daughters, Donella Glynn of Lethbridge, Brenda (Chris) Sande of Rocky Mountain House, and Paulette (Randy) Konynenbelt of Nobleford; nine grandchildren and several great-grandchildren. She was predeceased by her husband, Donald Glynn of Warner in 1979; parents, Francis and Edith Perra of Red Deer; son-in-law, Randy Konynbelt; sister Hazel Baker and three brothers, Melvin, Frank and Ross Perra. Phyllis was born in Coronation, AB on March 12, 1927 and received her education in Veteran, AB and worked on the family farm. She also worked in Castor Covenant Hospital until 1946 and in 1947, Phyllis moved to Warner, AB where she worked in the General Store until 1948. She married the manager, Donald Glynn and together they owned and operated the Store and raised their five children until 1969 when they sold the Store and moved to Lethbridge, AB. In October of 1982, she married Clarence Janke of Walsh where together they operated the family farm in the Graburn district until 1998 when they retired to Medicine Hat. A Private Graveside service was held at Hillside Cemetery. (Condolences may be expressed by visiting our website at www.cooksouthland.com) Honoured to serve the family is