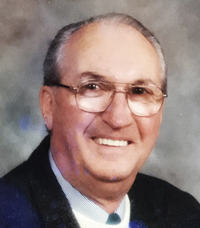 Anton “Tony” Bosch of Medicine Hat passed away on June 12, 2018 at the age of 93 years. Anton is survived by three sisters; his three children, Anita, Alan and Brent (Donna) Bosch; grandchildren, Taylor and Ryley Bosch, Trina, Christopher, Daniel and Matthew Bosch-Andrews; brother-in-law, Leo (Judy) MacDonald; not to exclude numerous nieces, nephews and friends. He is predeceased by his wife, Reta Bosch; one brother and three sisters. Anton was born on January 14, 1925 to Joseph and Helena Bosch in Burstall, Saskatchewan to a family of one brother and six sisters. He grew up on the family farm and later chose farming himself as an occupation. In 1962 Anton married Reta MacDonald in Medicine Hat. They lived on the farm at Burstall where they raised their children until moving to Medicine Hat. Anton worked for the Alberta Hail and Crop insurance until he retired. He enjoyed travelling with his wife, Reta, to the East and West Coast as well as Hawaii, Arizona and cruising to Alaska. Anton was known for his generosity, friendly nature, and his example of hard work. His faith was important to him, being involved with church choir and the Knights of Columbus. He was an active member of the Wellington community where he enjoyed helping out in the chapel, movie nights, and other activities. He loved to tell jokes and spend time with his family. He will be remembered as a caring husband, father, and grandfather. Those wishing to pay their respects may do so at SAAMIS MEMORIAL FUNERAL CHAPEL, #1 Dunmore Road SE, on Friday from 6:00 to 9:00 p.m. and on Saturday at HOLY FAMILY PARISH, 1451 Strachan Road SE, from 10:00 to 10:55 a.m. Vigil Rites (Prayers) will be held at SAAMIS MEMORIAL FUNERAL CHAPEL on Friday, June 14, 2018 at 7:00 p.m. The Funeral Mass will be celebrated at HOLY FAMILY PARISH on Saturday, June 16, 2018 at 11:00 a.m. with Father Philip Le, Celebrant. Interment will follow in the Roman Catholic Section at Hillside Cemetery. Condolences may be sent through www.saamis.com or to condolences@saamis.com subject heading Anton Bosch. Funeral arrangements are entrusted to