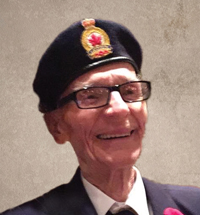 Ross Stewart Clements of Medicine Hat, beloved husband of the late Verna Clements, passed away peacefully on Sunday, May 20th, 2018 at the age of 92 years. Ross leaves to cherish his memory his children, Bruce (Diane) Clements, Diane Paull, Jim (Gisele) Clements and Cindy (Darren) Engel; one step-son, Lawrence (Darlene) Rowe; fourteen grandchildren, Carey (Brad), Paula (Dale), Jaimie (Rae), David (Rochelle), Michael, Graham, Roberta (JP), Jessica (Chad), Sean (Uly), Ian, Alex, Nathan, Zane (Erika) and Curtis (Adrienne); great-grandchildren, Karlee, Chase, Joshua, Samuel, Arland, Grayson, Alex, Livia, Alma, Gregory; one sister-in-law, Irene Clements; as well as numerous nieces and nephews. Ross was predeceased by his wife, Verna; his parents, John and Lulu Clements; one step-son, Les Rowe; one son-in-law, Arthur Paull; one great grandson, Andrew; three brothers, Jim (Eileen) Clements, Keith Clements and Frank (Phoebe) Clements; and two sisters, Maye (Don) Ball and Mary Druce. Ross was born on December 28th, 1925 in Carnduff, Saskatchewan. He entered the Royal Canadian Air Force in Regina in 1943 as Flight Sergeant and served in WWII, retiring in 1978 in Moose Jaw as Master Warrant Officer. It was in Moose Jaw that he also served as a Civil Servant at the Military Base from 1978 until 1990. Ross was a loving father and grandfather and will be missed greatly by all those who knew and loved him. The Memorial Service will be held at SAAMIS MEMORIAL FUNERAL CHAPEL, 1 Dunmore Road SE, on Thursday, June 21st, 2018 at 2:00 p.m. with Gary W. Goran officiating. The officers and members of the Royal Canadian Legion, Robertson Memorial Branch #17 will conduct a Poppy Service for their departed comrade. A Private Interment will take place at Hillside Cemetery. In lieu of flowers, memorial gifts in Ross’s memory may be made to the Poppy Trust Fund, 2020 – 15 Street NW, Calgary, Alberta, T2M 3N8 or to a charity of one’s choice. Condolences may be sent through www.saamis.com or to condolences@saamis.com subject heading Ross Clements. Funeral arrangements are entrusted to