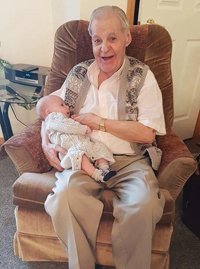 Barry Robert Miller, aged 79 years of Moose Jaw and formerly of Medicine Hat, AB passed away suddenly on Saturday, June 16th, 2018. Barry was born in Riverhurst, SK and received his education at Gilroy and Lawson, SK. He married Eileen Robertson on September 23rd, 1960 in Moose Jaw and together they raised two daughters. Barry lived in various locations where he operated his own businesses. His passions were baseball, hockey, and curling, and watched them on TV faithfully. In 1998 Barry received a liver transplant and lived longer that the Doctor’s expectation. Barry’s family will be forever grateful to the family of the donor. He was predeceased by his parents, Jim and Florence Miller; daughter, Terry; and brother, Ron. Barry will be lovingly remembered by his wife of 57 years, Eileen; daughter, Sherri (Ken) Robertson; granddaughter, Delaine (Brett); great-grandchildren, Nevaeh and Grady; sister, Myrna (Bruce) Pearson; as well as numerous other relatives. A Service to Celebrate Barry’s Life will be held on Wednesday, June 20th, 2018 at 11:00 a.m. in the Harvey Room at Moose Jaw Funeral Home. Dave Foley will officiate and a private family interment will be held at Riverhurst Cemetery at a later date. Flowers are gratefully declined. As an expression of sympathy, donations in Barry’s name may be made to the Canadian Liver Foundation, Suite 801, 3100 Steeles Ave E,Markham, ON L3R 8T3. Arrangements are entrusted to Moose Jaw Funeral Home, 268 Mulberry Lane. Todd Sjoberg, Funeral Director 306-693-4550 www.moosejawfuneralhome.com