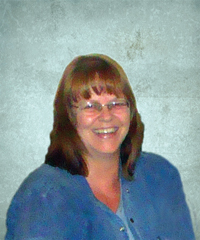 Bonita “Bonie” Jane Gellately, beloved wife of Ian Gellately of Medicine Hat, passed away on Saturday, July 14th, 2018 at the age of 59 years. Bonie also leaves to cherish her memory her son, Jay of Medicine Hat; her daughter, Heather of Kelowna, British Columbia; and her father, Peter Hepfner of Medicine Hat. Bonie was predeceased by her mother, Frances Hepfner. Bonie was born on December 16th, 1958 in Medicine Hat, where she was raised and educated. She met and married Ian at St. Patrick’s Roman Catholic Church on May 12th, 1979. Bonie worked as a Legal Secretary for many years at Pritchard and Company and later for Clinton Yarshenko. She enjoyed online casino playing, camping, crafting shadow boxes and the company of family and friends, who will miss her dearly. The Funeral Service will be held at SAAMIS MEMORIAL FUNERAL CHAPEL, 1 Dunmore Road SE, on Saturday, July 21st, 2018 at 1:00 p.m. with Gary W. Goran officiating. Interment will follow at Hillside Cemetery. Memorial gifts in Bonie’s memory may be made to the Canadian Breast Cancer Foundation, Alberta/NWT Chapter, #700 – 10665 Jasper Avenue, Edmonton, Alberta T5J 3S9 or to a charity of one’s choice. Condolences may be sent through www.saamis.com or to condolences@saamis.com subject heading Bonie Gellately. Funeral arrangements are entrusted to