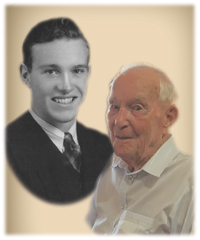 John was born to Harvey and Emily Ferguson at the home of Harvey and Pearl Massingill, just within the boundary of Saskatchewan at Empress. John received his early education at Estuary and at a one room country school called Chesterfield. He continued his education at City Park Collegiate and the University of Saskatchewan, both in Saskatoon. John married Sheila Margaret Duff in 1948, at the Fifth Avenue Memorial Church in Medicine Hat, Alberta. During their life on the farm, they raised three children which resulted in an extended family of: Lloyd (Elaine) and their son, Kevin and his children, Micah, Levi, and Jirah; Ian and his daughter, Lindsay Ferguson (Al Foley); Gwen (Brian) Ramsdale and families, Dane Kosolofski, Kyle (Lisa) and daughter, Zoey Kosolofski, Tory (Brock) Beach and daughter, Sawyer, Nicole (Gavin) Brinsmead and sons, Declan and Keenan, Kallie (Jaydee) Freimark and daughters, Isabelle and Emma. John’s memory will also be cherished in the hearts of his nephews, Galen Vancleave, Dalton (Linda) Vancleave and niece, Elaine Mayer. John was predeceased by his wife, Sheila; granddaughter, Tara Rae Kosolofski in 1980; granddaughter through marriage to Kevin, Melanie Ferguson (nee Serr) and a niece, Carol Millar. After the completion of a grid road to the Estuary Ferry, John and Sheila built a home near the ranch site where John was raised. They moved into their new home in April of 1975. Their house on the hill gave them a view of the river valley, their Hereford cattle and the peace and tranquility of country life. For many years, John was a councillor for the RM of Chesterfield and held the Chairman position of Chesterfield Water Users Association for over 30 years. John was also part owner in the Empress Auction Mart with about eight to ten other fellows. John moved to River Ridge (Masterpiece) in August of 2012 at 90 years of age and enjoyed many social gatherings, especially the music, dancing and engaging with all of the staff; always looking forward to the next interaction whether being a hug, joke or a smile. He loved life and the transition from the country to city life became seamless as River Ridge (Masterpiece) became his new home and the staff were like his new family. A Celebration of John’s life will be held at Cook Southland Funeral Chapel, 901 – 13 Street S.W., Medicine Hat, on Tuesday, July 24, 2018, at 11:00 a.m. with Life Celebrant Gerry Getz officiating and a time of fellowship thereafter in the Cook Southland Reception Facility. If friends so desire, memorial tributes in John’s name may be made directly to the Heart and Stroke Foundation of Alberta, #340A Maple Avenue S.E., Medicine Hat, Alberta, T1A 7L5 or to the Kidney Foundation of Canada, 6007 – 1A Street S.W., Calgary, Alberta, T2H 0G5. (Condolences may be expressed by visiting our website at www.cooksouthland.com) Honoured to serve the family is