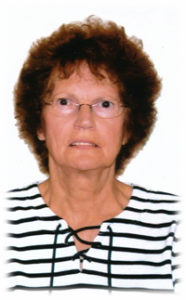 Doris Anne Pearl Bolig (nee Thompson) passed away peacefully at the Medicine Hat Regional Hospital on Friday, July 27, 2018, following a brief illness at the age of 77 years. She is survived by her children; Shannon, Felicia, Delsie and Jordan and their families which include ten grandchildren; one great-grandchild; two great-great grandchildren; two sisters and one brother as well as numerous nieces and nephews. Doris was predeceased by Bernard Bolig, her husband of 53 years on July 24th, 2013; her parents, George and Leona Thompson; three brothers, Bob, Charles and Bill and one sister, Sandy. Doris was born on May 18th, 1941, in Medicine Hat, Alberta and raised in Bow Island, Alberta. Her love of writing found her a job in the local newspaper office as a young woman. She met Bernard Bolig and fell in love! The two of them remained in Bow Island where they raised three of their four children before moving to Redcliff where they had their fourth child. A few years later, they moved to Medicine Hat where they both resided until the time of their passings. Her love of children led to her operating a daycare in her home for about 15 years before retiring. The next chapter of her life kept her writing stories and poetry, enjoying time with her family, gardening and walking both of her four-legged companions. Those wishing to pay their respects may do so at Cook Southland Funeral Chapel, 901 – 13 Street S.W., Medicine Hat on Wednesday, August 1, 2018, form 7:00 p.m. to 8:00 p.m. The Funeral Service will be held at Temple Baptist Church, 606 – 7 Street S.W.,â€ˆMedicine Hat, Alberta, on Thursday, August 2, 2018, at 1:00 p.m. Private interment will follow at Hillside Cemetery. Memorial tributes in Doris’ name may be made directly to the Medicine Hat SPCA, 55 Southwest Drive S.W., Medicine Hat, Alberta, T1A 8E8. (Condolences may be expressed by visiting our website at www.cooksouthland.com) Honoured to serve the family is

One Condolence for “DORIS BOLIG”