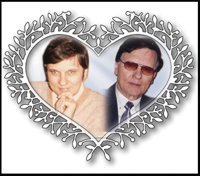 Leslie was born in Slovakia and passed away in Medicine Hat, Alberta at the age of 83 years. He went to be with his mother, father, brother and sister. Mourning his loss is the love of his life, his wife of 50 years, Irene “Babic”; their son, Les; daughter-in-law, Melissa; granddaughter, Jenaya and grandson, Jarrett; his best friends, Jeremy Laszlo, Steve Horvath, Mihaly Vajda and Tony Tenaglia as well as all of his relatives in Slovakia and Hungary. Leslie came to Canada in 1957. The majority of his work life was spent with Maple Leaf Mills (18 years) and the City of Medicine Hat Maintenance Department from which he retired after 22 years due in part to a head injury which occurred on the job. Up until then, Leslie never missed a day of work and was often fondly referred to as the “iron man”. He was very talented and had the ability to build anything; a man with a thousand traits. Leslie was very proud of his grandchildren and loved them dearly. He spent a lot of time with them and always showed his support of their activities, whether it was at the rink for hockey or in a theatre watching dance or music recitals. Grandpa was there whenever his health allowed it. Challenges with Lupus and a stroke slowed him down in his later years but he always had a smile and a “bootsy-bootsy” (pat on the head) for Jenaya and Jarrett. Leslie enjoyed playing pool and ping pong at the Veiner Centre; going to Tiger games and coffee time with his friends, Girtie, Lily, Frank, Nellie, Elliott, Lori, Diane, Bill, Betty and Don. Special thank you to Vivian and Maria at the Medicine Hat Mall Food Court and to the Home Care Respite team for the kindness shown towards Leslie. He will be remembered as a quiet man and a good husband, father, grandfather and friend.

His life was a blessing,

his memory a treasure,

he was loved beyond words

and will be missed beyond measure

“This is not goodbye…until we meet again!”

To honour Leslie’s request, no formal funeral service will be held. Family and friends will gather at a later date. Memorial gifts in Leslie’s memory can be made directly to St. Joseph’s Home – Carmel Hospice, 156 – 3 Street N.E., Medicine Hat, AB T1A 5M1 or to the charity of one’s choice. (Condolences may be expressed by visiting our website at www.cooksouthland.com) Honoured to serve the family is