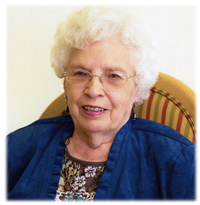 Dorothy Margaret Olmstead, beloved wife of the late Guy Edward Olmstead, passed away peacefully at West Park Lodge in Red Deer, AB. Born in Lethbridge, AB, Dorothy moved to Irvine with her parents at an early age and received much of her education there. In 1940, Dorothy went to Toronto, ON, where she studied piano and organ at the Royal Conservatory of Music, graduating with an A.R.C.T. Diploma. Returning to Medicine Hat, she established her own music studio and became a member of the Alberta Registered Music Teachers’ Association (A.R.M.T.A.). Dorothy taught on the staff of the Medicine Hat College Music Department for five years prior to her retirement in 1976. On December 11, 1948, she married Guy Olmstead and the couple remained in Medicine Hat until 2000, when they moved to Red Deer. Dorothy was well known as an accompanist for the Rotary Music Festival and she was an active member of Fifth Avenue United Church where she served as a choir member and assistant organist. She was an accompanist for the Medicine Hat Musical Theatre and for many local soloists and was the staff organist for Cook’s Funeral Home for many years. Dorothy was also the organist and Choir Director at Westminster United Church. She was a charter member of Beta Sigma Phi Sorority and celebrated her 65th year as a member when she lived in Red Deer. Dorothy was predeceased by her parents, Robert Harold and Margaret Florence (nee Gray) Davidson; and her husband, Guy Olmstead. She will be remembered with love by her sons, Robert Calvin Olmstead (Anne Findlay) and Douglas Edward (Linda) Olmstead; her grandchildren, Raegen Olmstead, Carmen (Glen) Clarke, Scott Olmstead (Krystel Pe Benito), and Kailey and Amanda Larson; her great grandchildren, Kiera, Kayden, Sydney, and Hunter Clarke. Dorothy will also be missed by her extended family of nieces and nephews, especially Lexy Fisher and Sonya Johnson, as well as many dear friends, including Joyce Condon and Judy Shand. Dorothy’s family would like to sincerely thank the exceptional staff at West Park Lodge (Choices in Community Living) for their loving care and the residents for their friendship; Dr. Willem Myburgh for his compassion and her community at Sunnybrook United Church in Red Deer. We thank Judy Shand from the bottom of our hearts for her friendship, time spent with Dorothy and for her love and guidance. If friends so desire, memorial tributes in Dorothy’s memory may be made to the charity of your choice. A Celebration of Dorothy’s life will be held at Cook Southland Funeral Chapel, 901 – 13 Street S.W., Medicine Hat, on Saturday, August 11, 2018 at 11:00 a.m. with interment to follow at Hillside Cemetery. (Condolences may be expressed by visiting our website at www.cooksouthland.com) Honoured to serve the family is