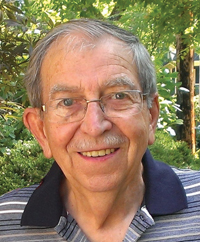 Our man Jack, the light of our lives and a bright light in Medicine Hat, hung up his tool belt on Friday, August 3, 2018. Jack passed away peacefully at home in the company of his family, after a courageous battle with colon cancer. Cherishing his memory are his adoring family: Dawn, his wife of 53 years; his two children, Katharine Knowles (Chris Mazurenko) of Vancouver and Tanis Knowles Yarnell (Patrick Yarnell) of Winnipeg; his two grandchildren, Olivia and Eric Yarnell; his sister Maureen (John) Dowler, brother Len Knowles, brother-in-law Bill (Monique) Pringle, uncle Len (Laurie) Sharland of Medicine Hat; and many cousins, nieces and nephews, all who miss him dearly. Jack was born in Medicine Hat on August 1, 1941 and was very proud of this city. In his personal life, Jack was known as many different things to many people. He was a Queen Scout, pigeon fancier, keeper of 101 dalmatians, king of the disco, photography hobbyist, Medicine Hat history buff, proud Kiwanian and Kinsman, part-time Shriner, possibly a Mason (he kept it a secret), challenger of City Hall, David Suzuki super-fan, professional and personal mentor, promoter of the local Prostate Cancer Support Group, and lover of bagpipes and all things plaid. He had a creative mind and great sense of humour. His practical jokes were legendary. He was a collector of many things, and had over 83 screwdrivers, 55 rolls of electrical tape, 41 staple guns, 27 vintage lightbulbs, and countless friends and neighbours, new and old, all who will miss seeing him around. He followed in his father’s footsteps becoming a Master Electrician, and took over the family business ‘Knowles Electric’ which he was proud to say was in business for over 80 years. Everyone knew where to find Jack—his shop door was always open. He was never too busy for a friend. His belief in people never wavered, often giving people who needed it advice, support, or a job. He believed in second chances. He had a collection of funny photos and signs posted at his shop and one of them said, ‘Never Give Up’ and he never did. He never gave up on people, projects, the hope that he would beat cancer, and that he would have more time. Jack spent his last few weeks in his backyard supervising work being done on many projects he always meant to do, even making a tree swing for his grandchildren. Family and close friends celebrated his 77th birthday with him on August 1st at a beautiful backyard party. He died two days later with paint on his hands and a golden tan from hours spent sitting outside, doing jobs, and listening to the birds in his beloved crabapple trees. The funeral service will take place on Saturday, August 11, 2018 at 3:00pm at Westminster United Church, 101 6th Street SE, Medicine Hat. A celebration of Jack’s life will take place immediately following the service at the Carriage House at the Medicine Hat Stampede Grounds, 2055 21st Avenue SE. All are welcome. Messages of remembrance and sympathy may be expressed by visiting: http://www.cooksouthland.com. Memorial gifts may be made to the Medicine Hat Prostate Cancer Support Group or the David Suzuki Foundation. Funeral arrangements are entrusted to Cook Southland Funeral Chapel, 901 13th Street, SW, Medicine Hat, tel: 403.527.6455.