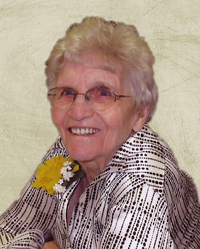 The family, who surrounded her during her last hours in this world, would like to announce the passing of their dear mother, grandmother and great- grandmother, Shirley Isabel Fischer, on August 8, 2018. Shirley was born on August 30, 1925 at Eatonia, Saskatchewan where she was raised and educated. Upon graduation from Normal School she taught for two and a half years in southwest Saskatchewan where she met and married Andrew Fischer in 1949. They made their home on the farm at Horsham where they lived for 32 years, retiring to Medicine Hat in 1981. Retirement was met with many enjoyable times – going on tours, bowling, and using their motorhome for many camping and fishing trips. Shirley’s greatest joys were the times she spent on the farm and even more, the time spent with her children, grandchildren, great-grandchildren, and extended family. Shirley leaves to cherish her memory four children, Orville Fischer of Maple Creek, Eileen (Kenneth) Lutz of Medicine Hat, Beverly (Dennis) Demchuk of Brooks, and Velma (Terry) Schmauder of Vernon; 11 grandchildren; 16 great-grandchildren; two sisters, Laviah Hayes of Eston and Betty Lothammer of Eatonia; as well as numerous nieces and nephews. Shirley was predeceased by her husband, Andrew; her parents, Henry and Isabel Dobb; and three sisters, Pearl Kellington, Vera Hern, and Agnes Goodwin. The Funeral Service will be held at VICTORY LUTHERAN CHURCH, 2793 Southview Drive SE, on Monday, August 13, 2018 at 1:00 p.m. with Pastor Jim Bredeson officiating. A Private Interment will take place at Saamis Prairie View Cemetery. Memorial gifts in Shirley’s memory may be made to the charity of one’s choice. Condolences may be sent through www.saamis.com or to condolences@saamis.com subject heading Shirley Fischer. Funeral arrangements are entrusted to