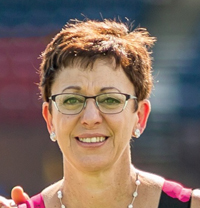 Jo-Anne Marie Anderson passed away peacefully on August 22, 2018, in Medicine Hat, Alberta, after a battle with lung cancer. She was surrounded by family.

Jo-Anne was born on May 17, 1960 in Kindersley, Saskatchewan to Walter and Marcella Gerein. She grew up in Smiley, and then moved into Kindersley at 16 to live with her friend Elaine.

She married Dean Anderson on June 27, 1981. They lived on a farm by Marengo, and farmed with Dean’s parents Garry and Dorothy. They welcomed 3 children together, Amy, Devone, and Holly. Jo-Anne spent her time as a babysitter, bartender, schoolteacher, and farmer. Her and Dean farmed until Dean’s passing in 2003. Jo-Anne moved to Saskatoon in 2006, and to Medicine Hat in 2009, where she lived with her husband Jim Holloway. Throughout the years they took many motorbike trips, which took them all over the world.

Her passions also included sewing and designing aprons as “The Apron Lady”, while attending numerous markets throughout the area. She was also on the executive for many local committees and groups. Everyone who knew The Apron Lady, knew she was the welcoming committee to any new members and market vendors. Fondly remembered for her gracious nature, practicality, straight talk and absolute selflessness, Jo-Anne will be missed by all who knew her.

Grandkids were certainly Jo-Anne’s first passion. Any conversation was often lead with, ‘Have you seen this latest photo?’, ‘I’ve just been to visit the grandkids,’ and she travelled around the World to see them all. Weekly updates were often sent to all family members about the growing bunch.

The family would like to thank Dr. Foley, Dr. Booyens, and all the staff at Medicine Hat Regional Hospital and the Carmel Hospice at St. Joseph’s in Medicine Hat.