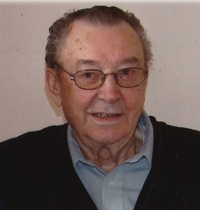 Elmer Victor Mueller went home to be with his Lord and Savior on Friday August 31, 2018 at 97 years of age. He will be lovingly remembered by his wife Lily; his children Lucie (David) Oliphant, Victor (Oekie) Mueller, Karen (Mark) Horch, and Myron Mueller. He is also survived by grandchildren Sarah (Andy) Kirschenman, Andrew (Kristine) Oliphant, Hannah (Lance) Penner, Aaron (Trena) Mueller, Stephanie Mueller (Joe Szabo), Nathan (Lauren) Horch, Charis Horch, and Daniel (Michelle) Horch. He is also survived by his six great-grandchildren – Isaiah, Sierra, Elinor, Jacqueline, Gabriel, and Malcolm. Elmer entered the military service in 1943; trained as a gunner overseas and was discharged from the service in 1946. He married Lily Roth in Calgary on December 8, 1951. They spent much of their lives farming in the Horsham area. In 1977, Elmer and Lily moved to Medicine Hat where Elmer worked in maintenance at South Country Village for 8 years. Elmer was always active in the churches he attended, and served on the South Country Village board of directors and the Pinecrest Bible Camp board. He was an avid fan of both baseball and boxing, and faithfully cheered for the Toronto Blue Jays. He also enjoyed playing the game and played for the Hosham Flyers in his younger years.Dad was gentle and kind. He was a godly man who understood what life and faith meant especially in loving his wife, children and grandchildren. To see his great grandchildren brought a smile to his face. The family would like to send their heartfelt thanks to the staff at South Country Village, MHRH unit 5W and St. Joseph’s Carmel Hospice. A memorial service will be held at the Wuerfel Auditorium, South Country Village, 1720 Bell Street S.W., Medicine Hat on September 8, 2018 at 2:00 pm. In lieu of flowers, donations can be made to South Country Village, 1720 Bell Street S.W., Medicine Hat, Alberta, T1A 5G1. (Condolences may be expressed by visiting our website at www.cooksouthland.com) Honoured to serve the family is