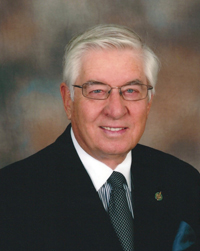 PORTER: Robert (Bob) Harold Porter, beloved husband of Donna-Lee, passed away in Medicine Hat, Alberta on Monday, September 10th, 2018 at the age of 85 years. He leaves to cherish his memory his sons, Lee (Cindy) Porter and their children Jordan (Ryan) Pancoast (Asher and Dylen) and Hayden; Rick (Janet) Porter and their children Kalan, Kelsey and MacKenzie; and daughter Marni (Mark) Semrau and their children Hunter and Lucas. He was predeceased by his parents Emerson and Thelma Porter. Bob was born in Medicine Hat on August 14th, 1933 and raised south of Irvine on the RP Ranch (est. 1883). In 1957, Bob married Donna-Lee Harstead of Brooks, Alberta. Together, they resided on the ranch for over 60 years, raising cattle and buffalo as committed and dedicated stewards of the land. Bob had a strong devotion to his community. He was a long time member and elder of St. John’s Presbyterian Church. He served as President of Kinsmen Club of Medicine Hat, Medicine Hat Shrine Club, Medicine Hat Exhibition and Stampede, Cypress Club, Chinook Club and Cypress Progressive Conservative Association. He was on the Board of Directors of the Western Stock Growers Association, Alberta Cattle Commission, Alberta Grazing Lease Association, Alberta Press Council and the Medicine Hat Community Foundation. Bob served 2 terms in the House of Commons in Ottawa as Member of Parliament for Medicine Hat (1984 and re-elected in 1988). He was the recipient of the Queen’s Jubilee Medal – County of Cypress in 1988; served as the Stampede liaison for the 1996 Great Centennial Cattle Drive; was awarded Rangeman of the Year in 2008 by the Calgary Stampede; received an Honorary Applied Degree (Medicine Hat College) in 2010 and was the Honorary Parade Marshall for the Medicine Hat Stampede in 2016. Of his many accomplishments, nothing meant more to Bob than the treasured time spent with his family. He delighted in the many musical and sporting activities of his children and grandchildren and rarely missed an event or recital. His most cherished times were family sing-alongs at the ranch with Donna-Lee at the piano. Bob will be deeply missed as a pragmatic and compassionate confidant to his many friends from various walks of life. He will be warmly remembered for his quick wit and dry sense of humour. He lived his life honourably with unwavering integrity and steadfast devotion to his family, his community and his country. If friends so desire, memorial tributes may be made to the St. John’s Presbyterian Memorial Fund (502 – 2nd Street SE, Medicine Hat, T1A 0C6), The Heart and Stroke Foundation (#340A Maple Ave SE, Medicine Hat, AB, T1A 7LS) or the Community Foundation of Medicine Hat & South Eastern Alberta (Rm 104, 403 – 6th Avenue SE, Medicine Hat, AB, T1A 2S8). The Celebration of Bob’s Life will be held at the CYPRESS CENTRE, 2055 – 21st Avenue SE, on Sunday, September 16th, 2018 at 2:00 p.m. with Dr. David J. Carter and Reverend Jeff Lackie co-officiating. A private interment will take place at Hillside Cemetery. Condolences may be sent through www.saamis.com or to condolences@saamis.com subject heading Bob Porter. Funeral arrangements are entrusted to

Leave a Condolence for Dale