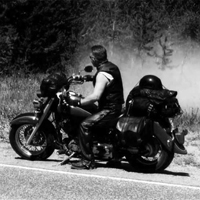 Dennis Bobby Undseth passed away on September 6, 2018 at Sarcee Hospice in Calgary, Alberta at the age of 65.

His stories will be passed on by his children; his daughter Frankie (Ben) and son Ryder of Calgary; his son Seth of Medicine Hat, and his son Cody of Edmonton; his mother, Bertha Undseth of Pennant; his sister Barbara (Bruce) Forrest of Ucluelet. Bob was predeceased by his father, Irwin “Buster” Undseth.

Bob was a man of many trades and skills. He had pleasant memories of being raised and working on the family farm. He told stories of selling houses and records; of building roads, pizzas, and coffees. Stories of labouring in the Yukon and on a dairy farm; of driving at Bob Bondurant School of Racing and later as a driver instructor with the CAA. He later moved on to School Safety Patrol and finally retired as the general manager of the AMA in Medicine Hat at age 58. He was a gentle man with a love for his dog, his motorcycle, and most importantly his children. He enjoyed his vehicles, but his transportation of choice would always be a horse. He mastered the art of the road trip and fully embraced the freedom of aimless wandering. It was rare for Bob to leave a new location without having made at least a couple new acquaintances. He taught his children that life was about experiences, so he offered them the beautiful, inspiring, and occasionally embarrassing experiences of a lifetime that he would go on to share with whomever would lend an ear.

A graveside service will be held on Tuesday, September 18, 2018, at St. John’s Lutheran Church and Cemetery outside of Pennant, SK followed by coffee with the family at Pennant’s Senior’s Hall where we will be celebrating Bob’s life and sharing stories in his memory.

Leave a Condolence for Ernie Whitrow