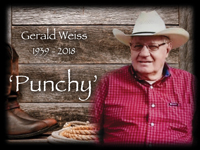 Mr. Gerald M. Weiss, beloved husband of Donna (nee Wolfer), passed away in Medicine Hat on Saturday, September 29, 2018, at the age of 78 years. Along with Donna, Jerry leaves to cherish his memory: daughter, Kimberley (Kelvin) Rehm; two grandsons, Quintin and Clayton who were his pride and joy of Saskatoon; sister, Pam (Ron) Bolokoski; brother, Bill; brother-in-law, Rick Busse of Calgary; sister-in-law, Marilyn (Art) Peter of Medicine Hat as well as numerous nieces and nephews. Jerry was predeceased by his parents, Elmer and Helen Weiss; sister, Donna Busse; brothers-in-law, Floyd Wolfer and Bill Flynn as well as sisters-in-law, Teanna Flynn and Mary Weiss. Jerry was born on November 2, 1939, in Medicine Hat. He grew up in the Box Springs district north of Medicine Hat where he developed his passion for rodeo. One of the highlights of his life was winning the steer riding championship at the Calgary Stampede in 1955 at the age of 15. In the early 1960’s, Jerry ranked as one of the top four bull riders in Canada. An avid sports fan, he was also an accomplished amateur boxer. Jerry fought in many matches around the province and he was a fierce competitor every time he entered the ring. He was a career employee with the City of Medicine Hat Public Works Department and sidelined as an auctioneer with Ellis Auction for over 45 years. Jerry’s favorite pastimes included going for a good cup of coffee and happy hour around the city. Family wish to extend their appreciation to Dr. Khan and nurses on the 5th floor at the hospital for providing continuing care over the past few years. A come and go celebration of Jerry’s life will be held in the Ortona Room at the Royal Canadian Legion, 702 – 2 Street S.E., on Saturday, October 6, 2018, between 1:00 p.m. and 5:00 p.m. Friends and family are encouraged to dress casual and make use of the podium to share their own favorite memories and stories. (Condolences may be expressed by visiting www.cooksouthland.com) If friends so desire, donations in memory of Jerry may be made to the St. Joseph’s Home – Carmel Hospice, 156 – 3 Street N.E., Medicine Hat, Alberta, T1A 5M1 or to the charity of one’s choice. Honoured to serve the family is

One Condolence for “GERALD WEISS”