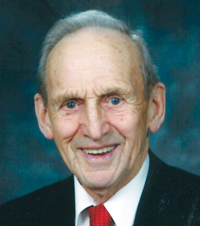 Albert John Sept of Medicine Hat, beloved husband of the late Nellie Mary Sept, passed away on Monday, October 1, 2018 at the age of 97 years. Albert leaves to cherish his memory his children, Duane (Susan) Sept, Louie Sept, and Elaine (John) Jeffery; numerous grandchildren, great grandchildren, nieces and nephews, and his siblings Ben, Oswald, Reatha, Ella and June. Albert was predeceased by his wife, Nellie Mary Sept; his daughters Mary Mason and Ann Beech, his parents, John and Regina Sept. Albert was born July 10, 1921 in Prelate, SK but spent the majority of his life in Edmonton, AB. He married Nellie Kowalski on July 28, 1949, and together they raised their family. Those who knew Albert will remember him as a “Jack of all Trades”. He was employed for many years at Fruehauf Trailers, Royal Alberta Museum, and also took on many jobs including gardening, general repair work, and general contracting. In the fall of 2010, Albert moved to Medicine Hat to be closer to his family. He was a member of the Knights of Columbus and he enjoyed an active lifestyle until last year when his health began to fail. Vigil Rites (Prayers) will be held at SAAMIS MEMORIAL FUNERAL CHAPEL, 1 Dunmore Road SE, on Monday, October 8, 2018 at 7:00 p.m., and at SAINT PATRICK’S ROMAN CATHOLIC CHURCH, 282 2nd Avenue NE on Tuesday, October 9, 2018 from 12:00 p.m. to 12:55 p.m. The Funeral Mass will follow at SAINT PATRICK’S ROMAN CATHOLIC CHURCH at 1:00 p.m. with Father Thomey Celebrant. A Private Interment will take place at Holy Cross Cemetery in St. Albert, AB at a later date. Memorial gifts in Albert’s memory may be made to the Carmel Hospice (St. Joseph’s Home), 156 – 3rd Street NE, Medicine Hat, Alberta, T1A 5M1 or the S.P.C.A., 55 Southview Drive SW, Medicine Hat, Alberta, T1A 8E8 Condolences may be sent through www.saamis.com or to condolences@saamis.com subject heading Albert Sept. Funeral arrangements are entrusted to